People spend a ton of money on their cars every year, from car payments to insurance to gas to maintenance. But for such expensive assets, most people normally don’t know a whole lot about what’s happening under the hood, or how they can drive or maintain their cars better over time. The folks at Automatic want to change all that, with a smart combination of hardware and mobile apps to keep people better informed of how their cars are doing.

Automatic has two main components to it: There’s a small hardware dongle that connects to a car’s onboard computer, which provides data about the state of the car and trips it makes, as well as a mobile app that collects and analyzes all that data. Together, they can provide a whole lot more insight into users’ vehicles than they have currently.

The Automatic Link, which connects to a car’s diagnostics port, is a $70 piece of hardware with built-in Bluetooth connectivity for transferring data from your car’s computer to your mobile phone. The app then looks at the data to act as a “smart driving assistant.” Based on what it knows about each trip, it can provide users with tips to help get better fuel efficiency, drive more safely, and extend the life of their cars. 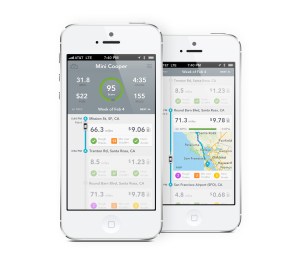 From a high level, the entire app is built to provide insight into the use of your car. It provides a driver score, which is based on a number of factors, such as how many hard brakes the driver takes during a trip, or how often he or she drives over 70 miles per hour. It also provides detailed information about the average fuel efficiency of the car in practical use, versus the EPA-expected gas mileage.

But users can drill down into all of their most recent trips that a driver has taken, giving them a timeline of where they went, how long it took to get there, a map overview of the trip, as well as fuel efficiency and the cost of gas consumed. As drivers get a feel for what parts of their driving are sub-optimal, they can improve them over time, which could save them a ton of money on gas and maintenance.

There’s also a diagnostics aspect to the app: Instead of taking your car to the mechanic to find out what’s wrong when you get that stupid “check engine” light flashing, Automatic can tell users in most cases what’s wrong with the car ahead of time. It also provides a crash alert, recognizing if there’s been an accident and automatically alerting emergency services with the car’s location.

Another handy side feature is the ability to keep track of wherever your car is parked. Once the car shuts down, the app just makes a note of wherever it last connected to the Automatic Link.

Ultimately, though, the goal is to get people driving smarter. “Very small changes in driving behavior can lead to huge increases in efficiency,” Automatic co-founder and CEO Thejo Kote told me. Driving at 70 miles per hour instead of 80, for instance, results in a 15-percent increase in fuel efficiency. And stuff like that adds up to a lot of cash over time.

Kote worked with Automatic co-founder Jerry Jariyasunant at UC Berkeley, where the two spent years working on car tech. The two were originally going to just do Automatic as a set of mobile apps and partner with a third-party on the hardware piece of things, but decided to develop it in-house after all. Automatic investors include Andreessen Horowitz, Founders Fund and Y Combinator, as well as a group of angels.

The Automatic Link is available for pre-sale now for $69.95, and is expected to ship in May with the launch of the Automatic iPhone app. An Android version is expected later in the year.