TechCrunch TV sat down with Shaquille O’Neal yesterday afternoon here at South By Southwest in Austin, Texas to talk about his current focus on all things tech, and it was pretty amazing.

People who are successful in the worlds of sports and entertainment aren’t usually the types that you’d associate with nerdiness. But Shaq, who was famously one of the first major celebrities to take to Twitter and had the service’s first verified account, says that he has been a big geek since way before he became a superstar in the NBA and Hollywood — and so being here in the world of technology is coming very naturally to him.

O’Neal is on the advisory board for 15-second video clip platform Tout, and during SXSW he is running a ‘Pitch Shaq‘ contest that invites startups here to send him a 15-second elevator pitch video. The winner, which will be announced this afternoon, will get the opportunity to then meet with O’Neal for a 1-on-1 meeting about an actual investment.

In the video embedded above, you can hear Shaq talk about how he’s proudly embracing his inner geek, what he’s looking for in a startup or founder, how he has bridged so many different industries over the course of his career, the futuristic app that he’s looking forward to seeing, and much more. He’s a really fantastic person to talk to and gave some great insights on business.

What’s unfortunately not in the video is what happened just after our interview wrapped, when I asked if I could get a photo with him. I still have one day left here at SXSW, but I think it’s safe to say that this is the highlight of my trip — if not my career: 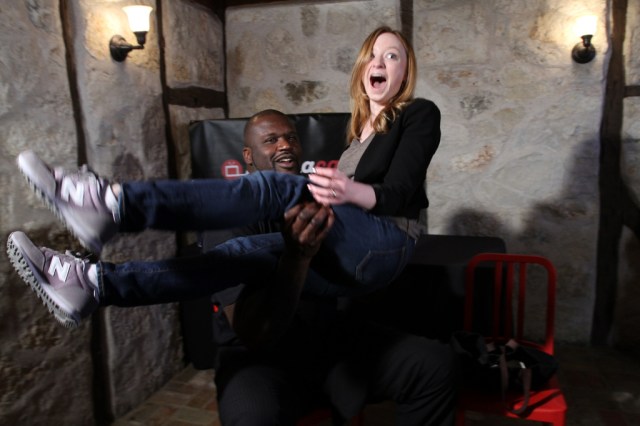