The Samsung Galaxy S IV is being announced later this week at a special event, but we’ve already seen plenty of leaks regarding the flagship phone’s hardware, but now there’s a new one (via SammyHub) that claims to depict the phone in the flesh, giving us an idea of what it could look like. If these leaks are accurate, the GSIV changes little from the previous generation and Galaxy Note II designs.

Posted to a Chinese forum, it’s still very possible that these are images of another yet-to-be released Samsung device, or simply elaborate fakes, but if that’s what they are, then they’re very well done. The images show a Samsung-branded phone with a 5-inch display, a metal-look band surrounding the phone, and what looks like slightly textured front and back surfaces. The rear is a glossy white, the slab has rounded rectangular edges, and the screen looks to extend closer to the bezel than in any previous Samsung handset, meaning it could manage not to have grown that much in terms of physical size despite the larger display. 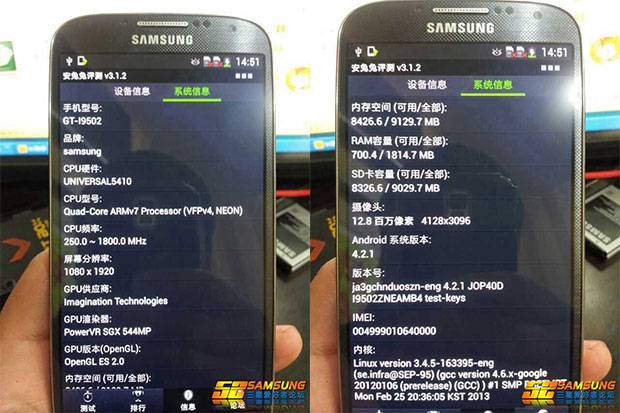 The leak fits with reports that the Galaxy S IV will retain its plastic outer case, and agrees with other recent rumors about software and internal specs, since it’s shown to be running Android 4.2.1, has a 1080p displays, runs 2GB of RAM and offers a 13-megapixel camera. The CPU numbering also suggests that it has a Samsung Exynos Octa chip on board as previously reported.

Samsung has been known to epically troll its fans, as it did last year with a disguised version of the Galaxy S III which was covered in an outer case that hid its true design. We could be seeing that sort of thing again, but this leak looks much more convincingly like a shipping device, not encased in any disguise. Regardless of whether it’s the real thing or not, we’ll find out for sure what Samsung’s latest flagship looks like on Thursday.