Hassan Baig Contributor
Hassan Baig runs ClubInternet, a technology company focused on 'The Next Billion.'
More posts by this contributor

Editor’s note: Hassan Baig is an entrepreneur who runs White Rabbit Studios, a South Asian gaming startup he founded four years ago in Pakistan. Follow him on Twitter @baigi.

Services like Appdata have been providing individual stats about gaming apps for a long time, but snapshot-like analyses of top-rated games on Facebook’s App Center have not yet been done. What follows is a cross-sectional study of top-rated gaming apps in the Facebook App Center. Such a study could be useful for game developers or strategic investors who have a stake in Facebook games and want a macro picture of where the ecosystem stands at the moment.

About My Data Set

Those interested can access the entire data set here. It is comprised of 855 top-rated apps from the game categories available in the Facebook App Center. “World rankings” have been used to make the study globally applicable; only web games are counted because the platform is not a leader in mobile; and a cut-off is imposed on top-rated lists that swell beyond 100 games. So, for example, whereas Zynga’s FarmVille makes the cut, Treasure Isle doesn’t.

Also note that the data represents a snapshot of the world rankings as they appeared on the March 1, 2013 and hence are fresh results. In case anyone wants to rectify a datapoint, feel free to drop me an email.

Categories and leaders. The Facebook App Center is divided into 12 categories: 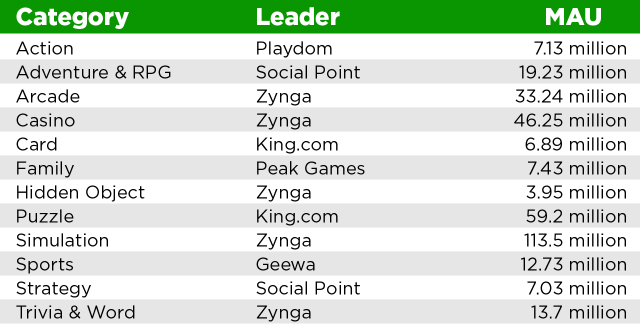 Almost half of the categories are dominated by Zynga, while the rest are led by King.com (2), Social Point (2), Geewa (1), Peak Games (1) and Playdom (1). Though Wooga and EA do not show up as category leaders, they nevertheless have a sizable presence in these genres. Other usual suspects also figure high in these lists, except perhaps for 6waves, which seems to have shrunk by more than three times its MAU on Facebook within the last year.

Most competitive category. Among the 12 genres, Simulation deserves special mention. More than half of Zynga’s MAU in top-rated games reside in this category. Players in this category have had their tastes and behaviors molded by Zynga’s game design and production values more than any other genre on Facebook. So in effect these users form the backbone of the Zynga network on Facebook and drive the cash cow of the company (i.e. ‘Ville’ games, which Zynga continues to churn out with regularity). Thus, it can be logically surmised that given the way the Zynga juggernaut has shaped and ultimately owned the Simulation category, it remains the most challenging genre for any studio to break into. 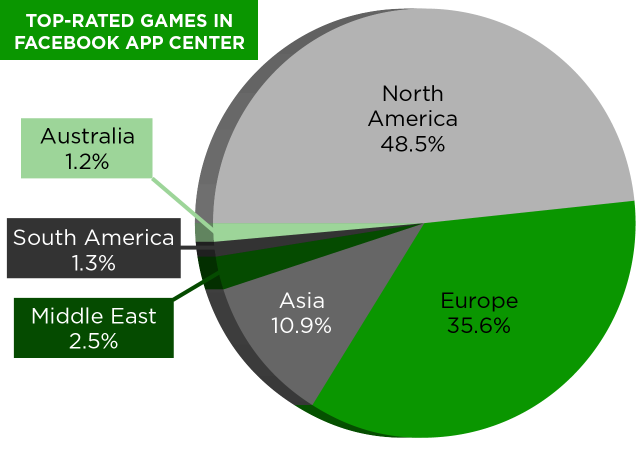 Asian studios. The dominance by North American and European studios is unsurprising news, but Asia’s relatively small representation among top-rated games is notable. Housing more than half of the world’s population and some extremely large, storied gaming companies, it seems game developers from Asia have not been able to fully grasp social gaming.

Among the top-25 social games from Asia, the biggest three are Buggle and Pengle by Cookapps (Korea), and Baseball Heroes by Syntasia, Inc (Korea again). Moreover Chinese social games figure 11 times among this top 25, and Japan only once. A complete list of the top 25 is here.

But one can see signs of change. The traditionally services-centric South Asian tech industry is in the midst of discovering an innovative streak with lots of product-based startups cropping up all over the region. In fact many success stories have been covered on TechCrunch. My prediction is that South Asia will catch up to the rest of the world and will be home to at least one $1 billion+ gaming company by 2020.

Middle Eastern studios. Only 2.5 percent of the top-rated social games on Facebook are from Middle Eastern studios, but this small percentage masks the big contributions of a tiny Middle Eastern country to the social gaming industry: Israel. One of the smallest countries in the Middle East, Israel is a hub of tech and game development in the region. Almost all Middle Eastern apps on the Facebook platform originate from Israeli studios, and almost all categories in the Facebook App Center have at least one Israeli studio game in their top ratings. This is testimony to the great strides Israel has taken in the game development space in the last four years.

Conceivably there are more ways to dissect these numbers, but I have covered the more salient trends. It would be great to hear what readers have to say about this analysis.