Editor’s note: James Altucher is an investor, programmer, author, and entrepreneur. He has started and sold several companies, run a VC fund, and is an active investor in many private companies. His latest books are I Was Blind But Now I See and 40 Alternatives to College. You can follow him on Twitter @jaltucher.

My wife, Claudia was upset with me. She said, “I didn’t shower! I haven’t left the house. I’m having coffee in the afternoon. I feel like I’m turning into you!” And quite frankly, she looked sort of disgusting while she was saying this to me at 3 in the afternoon.

“You realize that everything you say to me right now is potential material for a blog post.”

“Oh wait. No. I’m fucked! That’s it, I’m not going to say anything to you,” she said. She poured herself the coffee and left the room. I had asked her to make the coffee. She’s 20 pages into a sample script for the HBO TV show “Girls” and I wanted her to finish it. For no reason. Nobody asked her to do it. They have no idea who she is. I told her if she wrote the script I could get it to them.

I don’t know. I just said that. But I can probably figure out how to show it to someone.

Meanwhile, I wanted a coffee. I had been trying to write since 5 in the morning and I needed my mind sharp so I figured I’d make two phone calls to people who weren’t expecting me to call. Who could I learn from within the next hour? Hmmm….

My first call was to Shahed Khan. He had just Facebook-friended me an hour earlier for no reason at all. We had never spoken or interacted. I Googled him and then I Skyped him for the heck of it.

He’s on his third successful startup, BOLD Entertainment. He sold his first startup, MyStartupGear, after just three months in business. His second startup, Viatask, is growing like crazy. I called him up and we started talking.

“I left day-to-day responsibilities on Viatask in order to focus on this new one,” he told me.

BOLD hooks up startups with celebrities and structures the relationship with them. Some of the celebrities BOLD represents: Mark Wahlberg, Justin Timberlake, Leonardo DiCaprio, and many more. 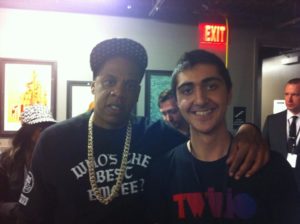 “We act almost like how a venture capitalist would act,” he said. “First we analyze the companies to see if they are good. Then we determine if there is a celebrity who would be interested who would be a good fit. Then we structure a deal and take 20 percent of the economics, just like a venture capialist would.”

He was 14 when he started MyStartupGear. Fifteen when he sold it and then started Viatask.

“Yeah,” he said, “in a few months I finish high school so I will have a lot more time.”

“Wait a sec,” I said, “when you sold your first startup were you the coolest kid in school?”

“Well, I defintely made a lot of money for a 15-year-old,” he said. “I used it to travel and go out to the Valley to meet other entrepreneurs, go to hackathons, do a lot more networking, and eventually I used some of it to help start Viatask.”

“Are you going to go to college next year?”

“I’m definitely going to take a little time off to focus on BOLD. Maybe even raise some money so we can invest in companies side by side with what we are doing with BOLD.”

“How did you get started doing all this?”

“I started programming when I was eight. Learned most programming languages by the time I was nine. And just read blogs non-stop and watched videos about entrepreneurship all the time.”

Damn! Just this past weekend I bought my 14-year-old daughter her first laptop. I even felt she was too young for a laptop. Ugh. Maybe I should’ve gotten her a laptop when she was six years old. I feel really bad now. What a horrible parent I am!

“I have a 14-year-old,” I said. “What advice would you give to kids or teenagers today if they want to go out and do what you did?”

“You’ve got to network, hustle, read, learn. Put yourself out there right now instead of saying ‘one day I will do this.’ Just go ahead and do it!”

And finally, I had to ask. “Doesn’t all this entrepreneurship stuff interfere with your social life?”

Shahed laughed. “You’re the first one to ask me that,” he said. “I guess I’ll get to it one day. Facebook and Twitter are my social life.”

Man, I was jealous. At the age of 14 I was too busy having girls reject me despite my glamorous acne, braces, glasses, and uncombed hair. Why didn’t I start any businesses?

After the call I started thinking of companies to introduce Shahed to. I introduced him to two right away that I felt he could help. But I was busy, busy, busy. I made my next call.

Perry Belcher made a million dollars selling the book “How To Start a Hot Dog Cart Business.” I had been in Austin a few weeks earlier when Perry described to me and Claudia how he and a partner invented and then sold (way too early) Purell. 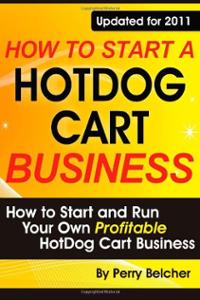 “Of course you don’t know,” Claudia said. “It’s the hand sanitizer that normal people use to clean their hands.” Ok. Now I know. Then Perry started to mention the hot dog cart thing but I had forgotten the details.

So right after I spoke to Shahed I called Perry.

“Perry, I bought the book. How much did you actually make selling this book? It’s just about making a hot dog cart.”

“You’d be surprised how many people want to make a successful hot dog cart business,” he said. “I’ve easily sold over a million dollars worth of the book in the seven years since I wrote that up.”

“What made you write this?”

“Funny, it was on my first visit to Austin and we were all walking around drinking and this guy at a hot dog cart started pitching us ‘Hey, try my hot dogs. I got the best hot dog in town’ and he was doing it all wrong. When I was 20 and broke I sold my taxicab I was driving and started a hot dog cart. One of the things we did was have girls in bikinis start selling the hot dogs. That tripled my sales right there. But that wasn’t the ultimate secret, though.

“So after I saw that guy in Austin I went home. And now I want you to carefully imagine this: I got naked and drunk and went into my bathtub. I took a microphone with me and talked for about two hours into the microphone about everything it takes to make a super-successful hot dog cart. 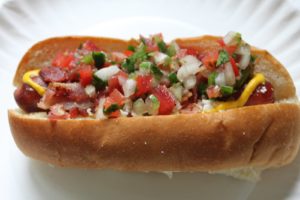 “Are you picturing my glistening body in the bathtub?”

“I’m very good at blocking out obscene images in my brain before they appear,” I said. He laughed.

“I then had the recording transcribed and I made it into a book. I don’t think I’ve even ever read the book. I set up a website and-”

“Oh gosh, it was so long ago I can’t remember. One sec.” I heard Perry yelling in the background and someone yelled back at him.

“Hotdogcartprofits.com was one of the sites we set up,” he said. “I wrote a 5,000-word sales letter and then I just bought the phrase on Google ‘I want to start a hot dog cart,’ and for every $200 I spent on Google I made $1000 so I kept doing it and upping the buy.”

“I’m a big believer in the Warren Buffett saying: ‘Instead of climbing 30 foot walls I’d rather find 2 foot walls and step over them all day.’ So that’s what I did.”

“The kind of person who will buy your product! I tested this all out. I videotaped a thousand people going through the website to see how they did it and I tested out different variations. You know how much my sales went down when I shortened the letter so you didn’t have to scroll?”

“85%. It turns out the more time people spend reading your letter, the more psychologically invested they are in it, and then the more likely they are to buy. Here’s another big secret: people read the letter from the bottom up.”

At this point, my phone went out. I got upset. I wanted to know why people read 5,000-word letters from the bottom up. I couldn’t get my phone to work so I switched batteries, got it to work, called Perry back.

“People read the very top to learn what they are going to get. Your sales pitch is at the very very top. Then they go right away to the bottom to see the price. This is what everyone does.

“By then they’ve decided if they want to buy your product. So they start slowly scrolling upwards from the bottom. They aren’t looking for more reasons to buy. They’ve already decided. Now they are just looking for reasons not to buy. So don’t make any outrageous claims in the middle.

“I call this ‘give them just boiled chicken in the middle of the letter.’ Just keep them interested. Give them as many facts as possible, keep them scrolling, and if you don’t scare them away, they’ll buy.”

“So what’s the secret of a successful hot dog cart?”

“So let me get this straight. You come up with an idea like that. You write a long sales letter with the sizzle at the top and bottom. You buy Google ads. You keep the middle of the sales letter non-threatening and you make a million dollars selling a book about hot dogs.”

“I’ve sold over $200 million worth of information products that way,” Perry said.

“Is it still that easy now? Do you still do it?”

“Yeah, you can still do it. There’s a lot more competition for Google keywords. But there’s ways to use Amazon Kindle books and other techniques to add to that basic approach so you stay high on the search ranking and also Amazon search rankings. I’m working on a book on this right now.”

I had a third phone call I was going to make. But this post is already too long. Maybe next week. It’s with a guy who has helped 74 out of 74 clients get their books on the New York Times bestseller lists. But I tried calling him and he wasn’t in. Next time.

Meanwhile, Claudia finished her spec script. So I have my work cut out for me tonight. I have never watched an episode of “Girls” so I figure I will watch a few, then read her script, then try to figure out if I know anyone who can read it. I want her to be happy. Happy wife, happy life.