AskYourTargetMarket, a market research firm which got its start in the demo pit at TechCrunch50 (in the pre-Disrupt days), is rolling out its biggest update ever to its service. According to CEO Lev Mazin, the company has made several improvements across all fronts, which include an expanded consumer reach, the addition of market research experts available, better pricing, a redesigned website, and more.

The last time AYTM (as it’s known for short) provided details to its audience reach, the company was saying that it had access to 4.5 million respondents. Today, the company reaches 20 million users worldwide – a metric it grew by expanding its own proprietary panels, but also through closing less than a half-dozen strategic partnerships with panel providers through API integrations. Due to NDA agreements, however, Mazin can’t provide those names.

He explains, though, that this increased reach is important because the larger AYTM grows, the more use cases it can offer to potential customers. They can now drill down further into customer demographics in order to carve up more precise segments of a user population – for example, not just smartphone owners, but Android owners who are male, who are in a specific age range, and who are also gamers.

The company has also now brought in its own market research experts to aid those who either don’t know how to or don’t have time to use the service’s still free DIY tools. Instead, starting at $995 and up, AYTM offers a turn-key service with a seven-day turnaround time. Mazin says that 80 percent of its research assistance is handled by its own in-house staff, while another 20 percent is outsourced to external experts, given the subject of the customer’s questionnaire. Depending on how AYTM’s customer base adopts this feature, he says the firm can quickly scale up either side of the expertise offered – internal or external – as the case may be. 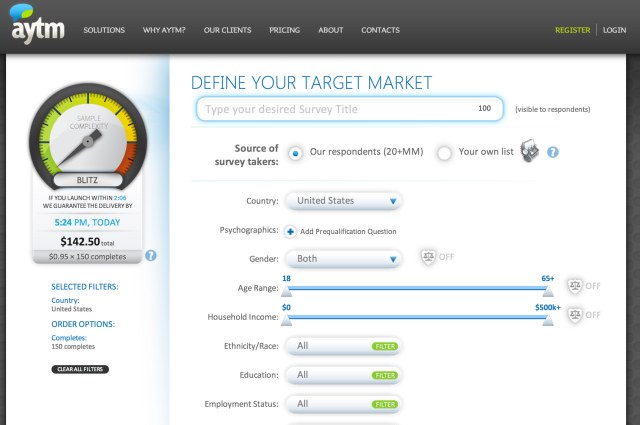 There are a handful of other features that have been introduced as well with this new release, including support for video questionnaires and video responses, which is a fairly unique way to add a little jazz to what might otherwise be sometimes boring data presentations. The company also adjusted pricing – before you could only get three completed questions per questionnaire for 95 cents each; now you can get 10. And you don’t have to blow through those asking the demographic info (gender, age, etc.) – you also get up to 10 of those on top of the actual questions you want to ask. Delivery times are also now no longer estimated, but guaranteed, and can be viewed in advance using a tool found here.

To date, AYTM has worked with thousands of companies and has run 150 million questions through its service. The 15-person company hit profitability last year, Mazin adds. All the new features and services are live now on the redesigned version of the AYTM website here.