iZettle, one of the many mobile payment companies vying for the title of the “Square of Europe,” is taking one more step to cover the market ahead of U.S. rivals like PayPal’s here and Intuit’s European commercial launches. Today, iZettle chalked up its first full API partner in the UK, the appointment platform BookingBug. First announced last June, the API effectively makes the company’s mobile payment service usable from within other, non-iZettle apps — giving iZettle a jump on this kind of functionality ahead of companies like Square, which as yet to launch an API of its own.

(However, PayPal seems to be moving ahead in the area of APIs: today it launched a new set of APIs to enable payments in third-party apps, although these do not yet extend to integrating its here mobile payment service into those apps.)

Letting third parties integrate iZettle directly into their apps gives those businesses the ability to integrate payments into their own services. To complete the transaction with iZettle, it automatically sends users to the iZettle app, and then back again to its own, and then automatically logs a charge as paid. In the case of BookingBug, it is using the iZettle integration to integrate payments into its bigger appointment booking platform. It says it has thousands of sole traders and small businesses using its appointment planning platform, and these customers will now be able to take card payments via the BookingBug app. The feature will go live on Android in April, BookingBug says, and is live already in the iOS app.

“A mobile payment dongle is absolutely vital to our businesses that want to take customer payment on the move – businesses that have traditionally been cash-in-hand,” Glenn Shoosmith, founder and CEO of BookingBug, tells TechCrunch. “For a personal trainer running sessions in the park, or a driving instructor on the move all day there’s no other option for taking mobile card payments.”

Asked why the startup chose iZettle over other mobile payment options, he said the API was one factor, but so was timing: “For the last 18 months or so mobile has been the number one thing we’re consistently hearing from our SMB customers. It’s really important to them and we’re working hard to be able to offer them really slick end-to-end mobile experience from booking to appointment fulfillment to payment to accounting and reporting.”

When it comes to local commerce, providing end-to-end services, from appointment booking through to inventory management and payments, is the end goal for a number of companies, including Groupon and Square. But unlike Groupon and Square, offering its payment service via an API gives iZettle a route to playing in this space as a partner rather than a company controlling the whole experience.

That gives iZettle — which has raised a publicly-disclosed $46.7 million to date from investors like Index, Creandum, Greylock, MasterCard and American Express — a slightly different positioning in the market.

That’s not such a bad thing, considering how many me-too mobile payments apps seem to be cropping up at the moment. “Teaming up with like-minded organisations that share our goal to empower small businesses and individual sellers makes perfect sense,” said Stewart Roberts, MD for iZettle UK, in a statement. “SMEs are the lifeblood of our economy and we encourage any collaboration that helps them to thrive in this tough economic climate.”

iZettle is currently live in the UK, Spain, Germany, Sweden, Denmark, Norway and Finland. PayPal here’s first European services are expected to launch this summer in the UK; Intuit is likely to be rolled out commercially significantly sooner; and Square has yet to announce any European plans to date.

BookingBug, meanwhile, launched in 2009 and has raised some $350,000 in funding. Shoosmith says that it now has “several thousand” SMB customers from the UK, U.S., Australia and Canada, in addition to a number of larger businesses like Pets at Home, Waitrose and Golfsmith to power appointments and offer redemptions. “The growth of the enterprise side of the business is very exciting for us. We’re doing some really cool stuff with retailers around the online-to-offline opportunity,” he says.

A look at how process works is illustrated in the screenshots below. 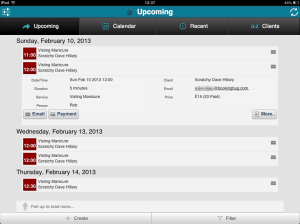 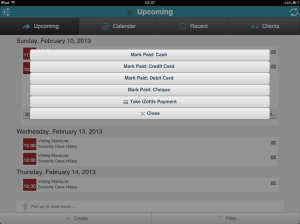 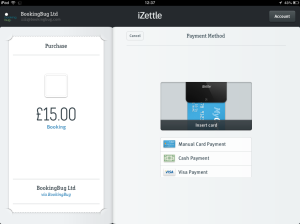 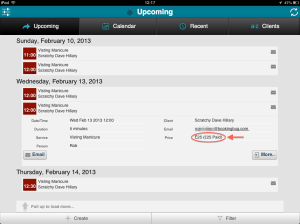