Hubbl, the app discovery service built by former TechCrunch Disrupt finalists, has introduced an interesting new feature today for users of its iPhone version: Passbook integration. To get started, you simply visit a link (hubbl.io/passbook) from mobile Safari, in order to add a pass to Apple’s Passbook which will then send you a new app deal every day. The Passbook feature will also be added to a forthcoming iOS app update as well.

Co-founder Archana Patchirajan explains that the idea for Passbook integration is that it would offer users a new way to discover apps, without having to first install an app for searching apps. It’s meant to be a more lightweight solution, but more importantly, it’s also an adaptive one. Even if the user isn’t on the native Hubbl application, the system is able to figure out which apps to recommend based on those the user clicks on. 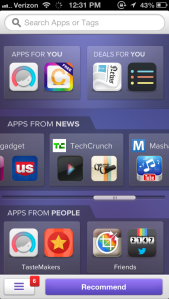 However, for users who do have the Hubbl app installed on their phones, and who have created an account, the recommendations will be even more personalized. Hubbl’s app can analyze which apps are on a user’s device, both at first install and then on an ongoing basis, after receiving the user’s permission. Once the apps are detected, the user is also prompted as to which apps they want to share with their network.

Patchirajan says Hubbl is currently able to detect over 60 percent of iOS applications in this way. And because Hubbl also uses this concept of hashtagging (assigning apps to category using # hashtags, like on Twitter), it’s also able to map users to various “personas” based on their app collection. This, in turn, improves the app recommendations both in the app itself and in the new Passbook feature.

Hubbl’s algorithms are also designed to learn from your activity in the app, and, if you so desire, you can choose to select your own interests in Hubbl to improve its suggestions. 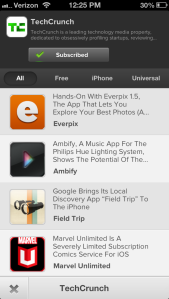 In addition to app suggestions, Hubbl shows users the apps related to the ones they’re looking at, and it offers real-time search, plus “news channels” to follow for more app ideas. For example, the “TechCrunch Channel” in Hubbl shows a list of the apps which have been reviewed on this website.

Hubbl has come a long way since it first publicly debuted this past October – it’s far more stable now and the user interface has changed dramatically, too. The app now uses the popular one-screen user interface concept with navigation that’s tucked off to the left side, though it has placed the navigation button at the bottom left instead of top left, which is more common.

Patchirajan says that Hubbl is now moving forward with the company’s B2B offering known as “Spacebar,” which involves partnerships with publishers and other content distribution networks. This will allow publishers to distribute apps in a more “contextually relevant fashion” he says. For instance, if you were reading an article about fashion or sports, it would use that information alongside other demographic and location info, to make apps suggestions which could be embedded on the publishers’ site in widget format. (There’s an example of this here.)

Though the B2B platform isn’t yet live, Hubbl has signed up two large publishers already who, combined, have 100 million mobile pageviews via apps and mobile web.

In the meantime, users interested in getting personalized app deals can just click this link using mobile Safari to add the feature to Apple’s Passbook: hubbl.io/passbook.