TastemakerX, a music discovery mobile application, which previously operated as something of a “stock market for bands,” is today announcing $1.25 million in new funding from Baseline Ventures, True Ventures, Guggenheim Venture Partners and Aol Ventures*. It’s also doing away with the whole stock market analogy, and is instead launching a new feature called “Collections,” allowing users an alternative way to show off their musical tastes.

The company first launched into beta last spring around the time of the Coachella Valley music festival. It’s squarely targeted at new music enthusiasts – those people, who in years past, may have spent their time wading their way through MP3 blogs, for example. But these days, music discovery has gone mobile, thanks in part to a large number of streaming music startups like Pandora, Spotify, Rhapsody, Rdio, MOG, Slacker, and more.

Instead of competing with that competitor lineup head-on, TastemakerX had been developing a niche for itself by rewarding users for their new music finds, via a metric called the “T-Score” which demonstrated their influence based on their trades of “artist shares.” It was very much like a virtual stock market, but apparently, that metaphor wasn’t a big enough hit (ha!) with TastemakerX’s audience. So today, the company is introducing Collections, which still allows users to showcase that they heard of so-and-so first and thereby earn their hipster cred.

No one had early access to this feature, but from what we understand (also, see screenshot below) it’s a more visual, perhaps even a Pinterest-like way to display a music collection. And the more music you have in one collection, the larger it appears on your profile.

The Collections are tightly integrated with Spotify, and users can create Spotify playlists generated by their Collection that can also be streamed directly in the app. There’s a new listening experience, too, which includes not only that Spotify integration, but also allows music to be pulled in from Songkick, SoundCloud and YouTube. 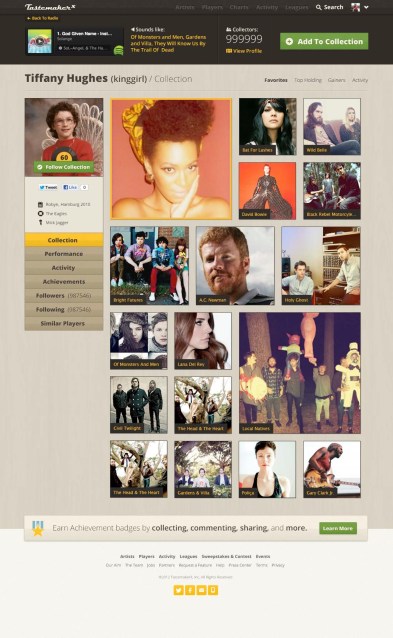 But TastemakerX isn’t apparently done with trying to gamify its app entirely – as it exits beta today, it’s introducing a Fantasy sports-like feature called “Fantasy Leagues for Music.” Frankly, that sounds like a lot more fun than trading stocks of bands, if you ask me, but it has another benefit for the startup as well – users playing Fantasy League games tend to be regularly engaged with their “teams,” making moves and trades, and generally keeping tabs on things. 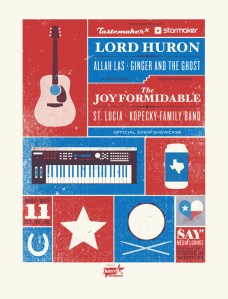 Of course, that’s still not a perfect way to bump up user engagement dramatically, given that while sports team players are quickly measured on their last game’s performance and assorted injuries, artists generally stay “good” or “bad” in one person’s opinion for some time. (So their record isn’t selling? That’s ok, they’re still gonna be big one day, I swear.)

The startup will debut its new experience at this year’s SXSW, of course, with a March 11 event at Speakeasy featuring Lord Huron, The Joy Formidable, St. Lucia, and others.

TastermakerX was founded by Marc Ruxin (CEO) and Sandro Pugliese, both who began their careers in the A&R department at record label EMI. The startup had previously raised a $1.8 million Series A from Baseline Ventures, True Ventures, and Aol Ventures last February.