Cable TV channel Bravo is extending their acceptably popular Play Live interactive/voting platform so that it can now be used for pre-recorded television shows broadcast on the network, allowing you to interact with programs in real-time. Before you yawn and click over to The Oatmeal, hear me out. This is interesting.

First of all, what is Play Live? It’s a “Participation TV” platform (that’s what Bravo calls it) where people vote or interact with questions during a television program using their laptop, tablet or smartphone.

Basically, there is a single URL and webpage serving up real-time content, questions, and polls, associated with whatever show is live on Bravo at any given time. As people vote or interact by selecting content on the website, the tally is calculated and displayed on the television screen in real-time, during the show. 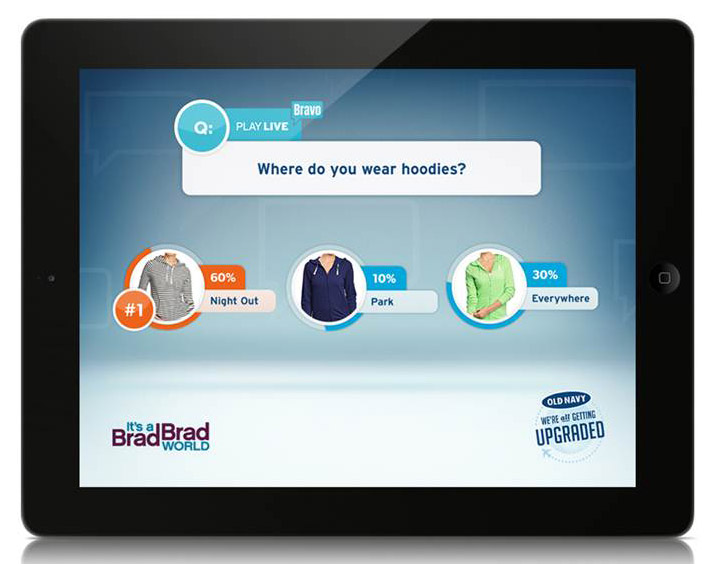 What’s new with this version of Play Live, is that it no longer has to be deployed only on live shows. I spoke with Lisa Hsia, Bravo’s EVP of Digital Media, and she told me that displaying and calculating polls during live TV shows is obviously easier to do than with pre-recorded shows. This is because there are actual human staff and production crews on the sets of live shows to tabulate and update the graphics, etc.

Part of the news here is that Bravo has been able to operationalize this platform in a way that it can now work with pre-recorded shows or reality TV shows that are not live. They’ve been able to work it in with their existing broadcast systems so they can do this more efficiently. It’s a technical feat according to Ms. Hsia.

The timing for this platform is pertinent too as habits in watching traditional programming are changing, according to the New York Times. And with stats like 26.1 million tweets being sent during the Super Bowl this year, clearly people have an appetite for watching and interacting with a second screen during traditional TV broadcasts. Just ask Google.

There’s more though, and this is the strategy that I think is interesting. While this interactive platform is trying to engage viewers of TV programs, Bravo is also making it available to advertisers too.

This week Bravo has partnered with Old Navy, and is extending the Play Live platform into one advertisement scheduled during tonight’s episode of It’s a Brad Brad World (which, I suspect, is about Brad.)

Users will be able interact with the commercial in the same way they do the regular show.

The hope is that once habits are in place for interacting with TV shows this way, extending interaction points to commercials will increase engagement there too. It makes sense to me, and seems like it could keep people from tuning out.

Bravo hopes that strategies like this could actually keep people from DVRing shows as actively because of the promise of interaction. It seems to be, at best, an interesting start.