The U.K. has the highest proportion of online individuals out of the five leading economies in the European Union, according to telecoms regulator Ofcom which has compared the U.K.’s fixed and mobile broadband performance to France, Germany, Italy and Spain (Ofcom’s EU5). It’s just one of the metrics Ofcom is tracking, having been tasked by the U.K. government to produce regular European broadband scorecard reports in order to quantify a coalition pledge to ensure the U.K. has the fastest broadband of any major European economy by 2015.

“The UK generally performs well among major European economies [for fixed and mobile broadband services]. On all measures of coverage, take-up, usage, price and choice, the country ranks between third and first in the EU5,” said Ofcom. The regulator has previously released research showing the U.K. leads multiple international markets for technology adoption and usage — suggesting it’s something of a bellwether market for technology startups.

In its European scorecard Ofcom notes that the U.K. has some of the lowest fixed and mobile broadband pricing in the five tracked countries — thanks to a “highly competitive” market — indicating that lower costs have helped to drive technology adoption.

Ofcom characterises Internet usage in the U.K. as “very wide”, with 81 per cent of individuals online at least once per week as of Q1-Q2 2011 — a higher proportion than in the four other measured countries. The reason Ofcom is looking at data from, in some instances, almost two years ago is to ensure “data and methodologies are comparable across the selected member states”, it said. 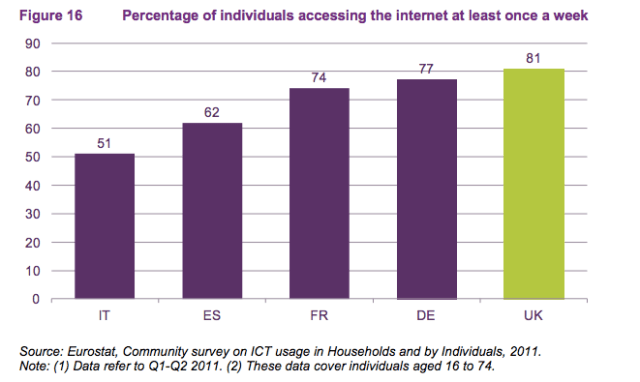 The U.K. also contained the lowest proportion of individuals who had never used the Internet in Q1-Q2 2011 — a just over a tenth (11 per cent), compared to more than a third (39 per cent) in Italy and just under a third (29 per cent) in Spain.

And the highest proportion of individuals who had bought or ordered goods or services online within the 12 months to Q1-Q2 2011. Germany was the next highest: 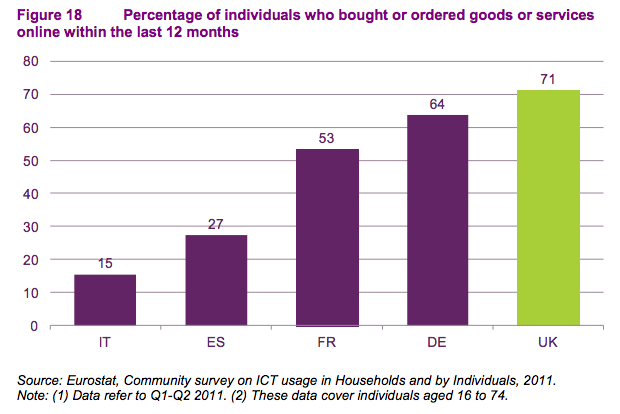 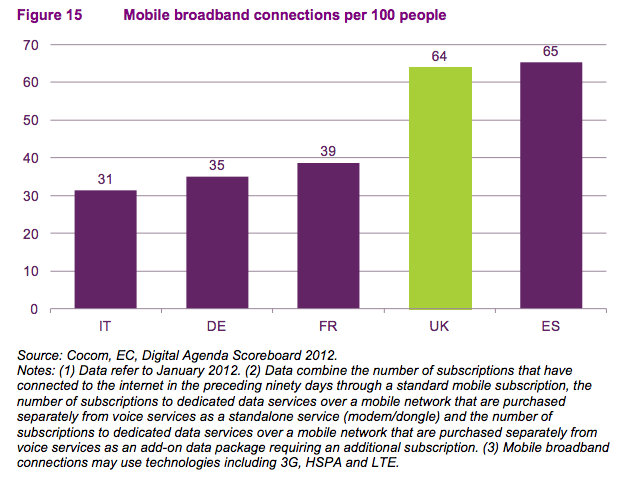 When it comes to fixed line superfast broadband cover, Ofcom found the U.K. lies third among the EU5 — “slightly” behind Germany and Spain — with superfast coverage reaching 65 per cent of UK premises in June 2012.