Today, Roku is launching the newest version of its streaming media box, the $99 Roku 3. While keeping a similar form factor to previous Roku set-top boxes, the latest in its series should be much faster and more responsive, thanks to hardware upgrades. It also comes with a new remote control with a built-in headphone jack for private listening, as well as a new user interface for navigating its hundreds of channels.

Available for sale on Roku.com and Amazon.com, the new Roku 3 is the next evolution in the company’s streaming set-top box hardware. While the Roku folks wouldn’t go into specifics about the hardware in the new box, they said it represented a significant upgrade over the Roku 2 XS, which was the previous $99 box. (No worries — I’m sure there will be a teardown of the Roku 3 within the next few days.)

Anyway, the updated hardware under the hood should mean a faster browsing and navigation experience for Roku users, as they click through all the various content choices on the box. The Roku 3 also supports up to 1080p video and has dual-band wireless connectivity and Ethernet and USB ports. It also has an available MicroSD slot for extra storage.

The Roku 3 also added an interesting new feature to its remote control — a headphone jack and in-ear headphones to allow users to privately listen to the TV without disturbing others around them. It has more or less the same form factor as the one that shipped with the Roku 2, and like it, the new remote also serves double duty as a game controller. That’s important, since the Roku 3, like the Roku 2 XS, comes with Angry Birds Space pre-installed.

All that said, the biggest new change to Roku’s offerings probably isn’t the hardware, but the addition of a new interface for navigating its Channel Store, apps, and settings. There are more than 750 channels available to Roku users worldwide, the previous up-down-left-right navigation scheme for the Roku Channel Store wasn’t very good. It also resulted in a lot of navigating around different channel information screens to determine whether or not you wanted to install them. 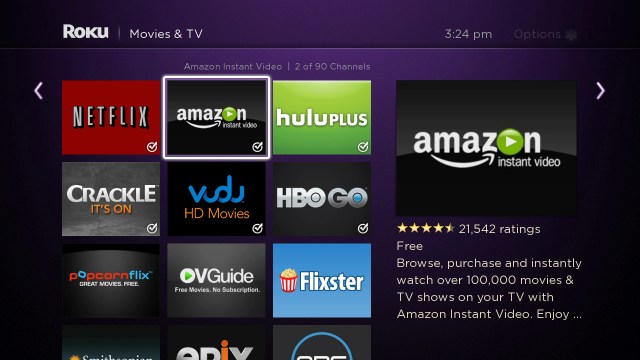 With that in mind, Roku has updated the streaming box’s user interface, with an easier-to-navigate flow for scrolling through categories of apps, finding out information about them, and installing them. With an average of 15 channels installed per box, Roku also needed to improve the way that users got around the apps they had already chosen to watch. As a result, the new Roku UI also has an updated grid interface for users to scroll through the channels that they’ve already installed.

Rather than scrolling left-to-right like in the previous interface, users now can see nine tiled apps on the home screen. The interface provides a view of more detailed information for the apps that users are looking at on the left side of the screen. Viewers can also set their favorites and see a stream of apps as they scroll down below the top nine.

In addition to the new UI, Roku has added a universal search feature, which will allow users to quickly find their favorite pieces of premium content. Like other streaming devices, the new search works across multiple apps, highlighting TV shows and movies that are available through subscription services like Netflix or Amazon Prime Instant Videos, as well as electronic sell-through or video on-demand services like Vudu.

New Roku 3 owners will have the new UI and search functionality immediately, but Roku plans to make the same features available to existing Roku boxes through an update in the coming weeks.

Last summer, Roku raised $45 million to help expand into new markets and get its devices adopted as secondary set-top boxes in pay TV homes. The company has been working with partners like BSkyB and Time Warner Cable to make their programming available for streaming on the box. In fact, Time Warner Cable released its Roku Channel earlier today, just in time for the new hardware.