Y Combinator-backed Tagstand, an NFC startup which is carving out a niche for itself given the increased number of Android devices supporting the technology, has now signed several deals with mobile carriers and OEMs for co-branded integrations and preloads. The largest of these new deals is with T-Mobile, which was almost leaked during this year’s CES, but there was no mention of the Tagstand partnership at the time. 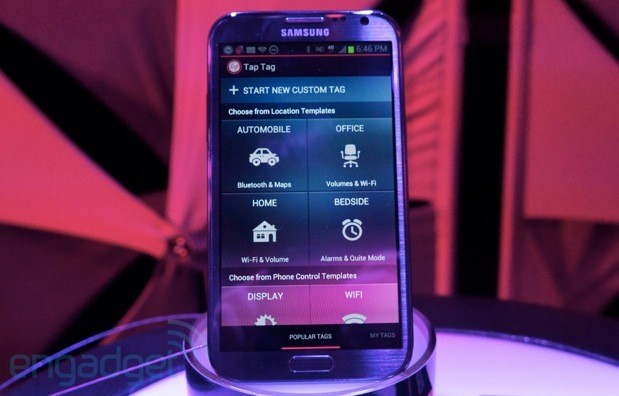 The carrier has been working with Tagstand to power T-Mobile’s forthcoming “Tap Tag” application, which basically functions like Tagstand’s own NFC Launcher app (or Samsung’s TecTiles), just under different branding. With the app, users of Tap Tag-enabled phones can configure NFC tags or stickers to launch particular actions or perform tasks with tapped with their supported T-Mobile Android phone. For example, you could tap a tag by your nightstand to put the phone on silent mode before going to sleep, or tap a tag in your car to launch your favorite music app. Tagstand also recently partnered with accessories maker TYLT, for even more integrations between the phone and external devices like speakers and mounts. T-Mobile is launching the Tap Tag software on March 27. (You can see the early demo here on Engadget’s site.)

The company says it’s also working with other carriers and OEMs, including EMT (Estonia, Baltic carrier), AVEA (Turkey) and Alcatel, a Hong Kong-based manufacturer which will be preloading Tagstand on devices sold to a major European-based multinational carrier which did not want to be named.

T-Mobile is the largest deal for Tagstand however, and it comes at a time when the operator is really pushing NFC technology, in part due to its involvement in NFC-based mobile payments initiative Isis. For Tagstand, the benefit to working with these carriers goes beyond the financial dealings because it also means that Tagstand’s distribution increases, and T-Mobile and others will aid in the still much-needed consumer education efforts. After all, NFC is out there, but it’s still early days in terms of real-world adoption.

NFC is still one of those technologies which is either poised to hit it big, or end up failing to engage the mainstream – at least here in the U.S. (NFC has traction in other parts of the world, it should be noted.) ABI Research predicts there will be 1.95 billion NFC devices shipping by 2017, but this year’s number is much smaller than that: around 200 million. Nine out of ten of the top manufacturers have NFC-enabled handsets commercially available, with the major holdout on this front being Apple. And Apple’s decision to not participate is potentially market-changing – if it never adopts NFC, then it can never become a truly ubiquitous technology. 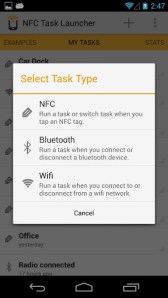 There’s also the argument that even if NFC never makes it as a payments technology, there’s still the potential for it to be adopted for other use cases – like those that Tagstand offers. That’s true to a point, but becoming a part of users’ daily lives would greatly aid in the awareness needed for something like Tap Tags, TecTiles, or Android Beam (Samsung’s S Beam), for example, to really take off. Tagstand, however, is hedging its bets on NFC, having recently added support for Bluetooth and Wi-Fi triggers, which can now be used to launch tasks in addition to NFC tags.

Today, Tagstand is finding a small audience among early adopters. Co-founder Kulveer Taggar says that the Tagstand software now has over 185,000 active devices, with users launching around 41 actions weekly on average. 30 million actions have been launched to date, with over 1.5 million actions executed each week. 20 percent of Tagstand’s app users are daily and weekly actives, and the most popular apps to launch include Google Maps, Pandora, Waze and Facebook.

UPDATE, 3/28/13: Weeks after this story was posted, T-Mobile cancelled its contract with Tagstand, and decided to postpone the launch of its TapTags indefinitely. Because of the merger with Metro PCS, the new CEO put a hold on all such partnerships, with a view to simplifying their products, we’re told.