Creating Google spreadsheets doesn’t have to be a boring undertaking, especially if you’re a fan of beer. Here’s a fun little autofill option that the Drive team has put into place to help you list out popular beers.

Simply type the word “lager” in the A1 cell of the spreadsheet and then “ipa” in the A2 cell. Highlight both, hold the option key (or CTRL for you Windows users) and drag the bottom cell down. You’ll get something that looks like this: 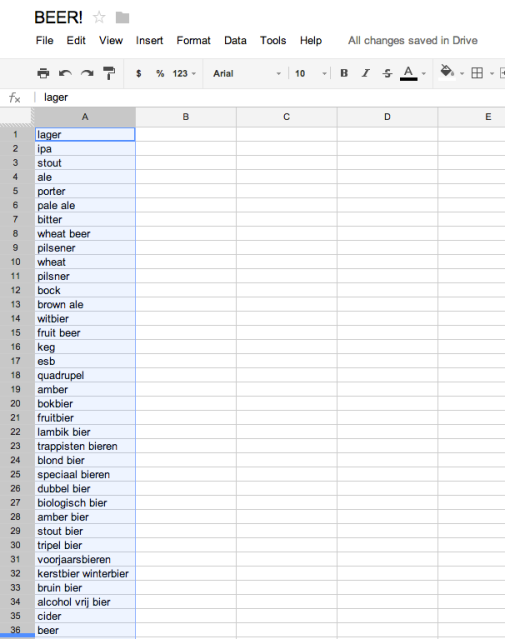 Someone at Google really likes beer, and if you’re ever looking for a way to find an infinite number of options to place into a spreadsheet, now you know how to. Of course, there are other auto-fill options, such as the day of the week, colors, states and car brands, but this one is infinitely cooler. It appears that this is a project called “Sets” that was retired from Google Labs a while back.

I’ve dragged the cells down to 200 lines and it doesn’t seem to ever stop. Here’s another neat one, found by our own Chris Velazco: Drop TechCrunch into the top cell, and drag it down holding the Option key to see other tech blogs:

That’s technology hard at work, folks. Know of any other cool spreadsheet autofills? Drop them in the comments.