Hubble, a new mobile application for private social networking created by the team that developed Flip Video, is launching today to serve as the secure hub (get it? Hubble?) for family communication. The app currently supports text messaging, voice messages, photo and location sharing and alerts, and may extend into other real-time communication methods like voice and video in the future, too.

In an age when so many families have adopted smart devices – even the kids – it’s somewhat remarkable that no single service has managed to become a centralized place where family members go to connect with each other, share news, and generally communicate.

One could argue that Facebook is exactly this place, but it’s not really. You may be connected with family on Facebook, but kids and parents tend to stay at arm’s distance there. And perhaps more importantly, it’s not really used for private messages, given that you’re also connected with colleagues, co-workers, bosses and other acquaintances on Facebook, too. After all, these people don’t even want to see your kids’ baby pictures, for goodness sakes. Nor is Facebook ideal for the more mundane missives of everyday family life – the note that dad will be home at 7:00 pm tonight, or the question from mom asking if everyone wants pizza for dinner, etc. 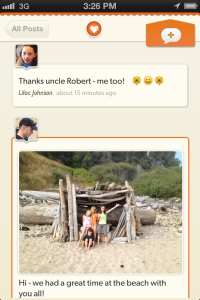 So for the team behind Hubble, the lack of a default winner in the private, family networking space is seen as a huge gap in the market which it aims to fill. The team is led by co-founder and CEO Andre Neumann-Loreck and Robert Evans, co-founder and head of development. Neumann-Lorek and Evans both previously worked at Pure Digital, makers of the once beloved Flip Cam. Neumann-Lorek was COO at Flip Video, while Evans moved from product development to VP of manufacturing and operations over his many years at the company before its acquisition by Cisco (and subsequent shut down).

Now parents with school-aged children themselves, the founders are newly motivated to build upon their previous experience and passion for private networking. The Flip Cam, as you might recall, had also offered a private social sharing app called FlipShare, which allowed users to send video to others without posting it to public social networks like YouTube. So even though Hubble’s beta only began in October, you could say that the founders’ interest in this sort of private sharing extends many years back.

With today’s public launch, families can communicate with each other with text messages and voice messages, share photos and send location alerts. The location alerts are geo-fenced alerts triggered when kids or parents arrive at various destinations, like home, work or school, for instance. 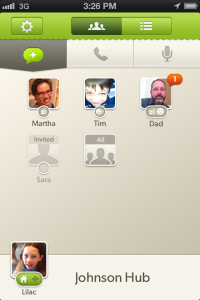 But while everyday communication is a central focus for Hubble, there’s another element to the service, too: memory making. The app also features a private timeline of all the activity in the app, including photos shared and the associated comments, the endearing voicemails you now have a way to save, the texts and more.

“What we’ve seen with our children is that a lot of those family logistics start off as those small, trivial things, but some of them become the memories you want to preserve later,” says Evans. “You know – your daughter texts you and you go to pick her up, and she sends a picture thanking you. It’s these little mundane parts of life that become your memories of family life down the road,” he adds.

And they’re also parts of life that are today still spread out across a number of services: Facebook, maybe, for photo sharing; SMS or email for everyday communications. These platforms do the job, but they’re general-purpose solutions that aren’t optimized for families. Items shared through SMS eventually get lost, emails get deleted, and Facebook has become so public that it’s not even appropriate to use it to share these sort of messages. Evans notes, too, that his family had experimented with Path. But when his wife added a friend to the network, the timeline filled up with messages and photos no longer related to the immediate family, marring the experience.

Though Hubble is meant for immediate families only, users can selectively share outside the network, posting to Facebook and Twitter. And they can send “Hubblegrams,” which are sort of like digital postcards, to other families on Hubble (or via email), as a way to include extended families in their network. 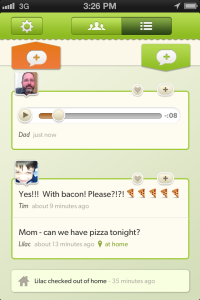 The app is iOS-only at launch, which might slow down immediate adoption for “cross platform families” (like mine, for instance), but the founders assure me the Android version is in the works right now. They also plan to eventually connect the digital world with the physical, offering goods like albums and printouts, too.

The company is planning to monetize by charging a small fee to save the family’s timeline beyond a certain point – like say, maybe a year or so. And they’re working to do some interesting things with how those old memories will be resurfaced, as well. Instead of competing with storage solutions like Dropbox or organizers like iPhoto, Hubble’s albums would be richer. “What we have is somewhat unusual,” says Evans. “We have not just the photographs, but the locations, the context, the comments about the photographs, all stored chronologically knowing who in the family they came from.” He says they’re thinking about ways to show users “home movies of your life.”

Based in San Francisco, and now a team of eight, the company has under a million in friends-and-family investment plus some self-funding. Hubble is raising a seed round now.