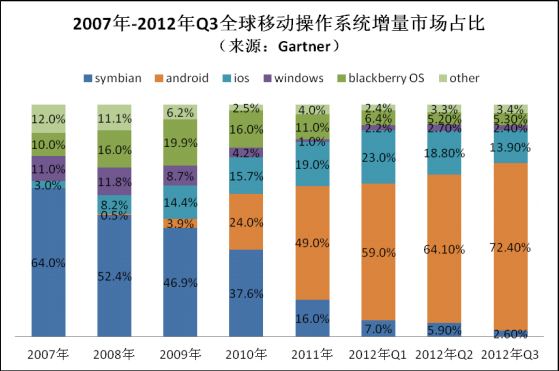 China’s technology Ministry is worried about the dominance of Google’s Android platform, according to Reuters. The news agency links to a whitepaper authored by the research arm of China’s Ministry of Industry and Information Technology which contains the above graph — so it’s not difficult to see what the Ministry’s issue is: Android has grown from a standing start in 2008 to saturate the local market, taking 72.4 per cent in Q3 2012 (Gartner sourced data).

According to Reuters, the Ministry’s whitepaper is critical of China’s dependency on a platform it argues is ultimately controlled by Mountain View. “Our country’s mobile operating system research and development is too dependent on Android. While the Android system is open source, the core technology and technology roadmap is strictly controlled by Google,” the whitepaper states.

It also claims that Google has deliberately impeded the progress of some Chinese companies seeking to develop their own operating systems (presumably by forking Android) by delaying code sharing, and accuses Google of using commercial agreements to restrain the business development of mobile devices of these companies. The paper goes on to pile praise on homegrown companies such as Alibaba, Baidu and Huawei for creating their own systems.

Google declined to comment on the allegations in the whitepaper when contacted by TechCrunch.

Alibaba’s Aliyun OS was going to be used by Acer to power a Chinese smartphone planned for launch last year — but cancelled, at least in part, after Google intervened. (Google argued that Acer was building what it described as a “non-compatible” Android device, having previously committed to building compatible devices.) Presumably this is the sort of commercial pressure the whitepaper is critical of.

Alibaba also declined to comment on the Chinese whitepaper when contacted by Techcrunch.

Another graph in the whitepaper pegs the Aliyun OS’s share of the 2012 Chinese market at around one per cent — versus 86.4 per cent for Android: 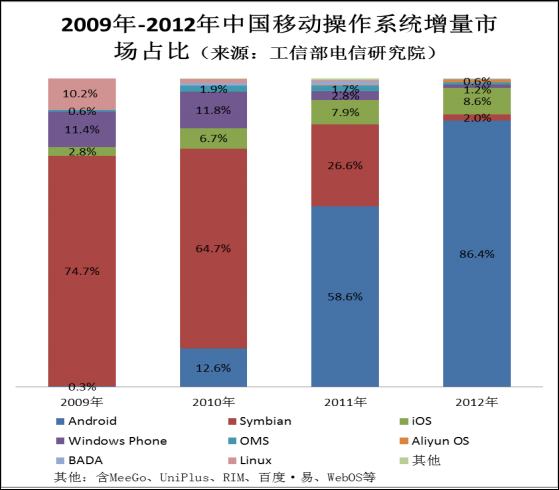 Reuters speculates that the Chinese government could be planning to impose regulations on Android to try to rein it in and give Chinese companies a chance to take some a greater share. That could also be good news for smaller foreign players such as Finnish startup Jolla, which is using the MeeGo open source OS as the foundation of its new Sailfish platform. Jolla is targeting its debut smartphone at China first, as well as setting up a base in Hong Kong to build an alliance around Sailfish. It has also attracted investment from China.

The smartphone market in China is undoubtedly huge — Jolla’s CEO describes it as a “300 million device market”.  China also passed the U.S. as the world’s top country for active Android and iOS smartphones and tablets last month so it’s also a growing market. But while Android undoubtedly dominates the OS landscape not all Chinese Android-powered device are equal since a large proportion of homegrown mobile makers heavily customise Android and do not carry any of the standard Google services such as its Play store.

“Almost none” of the ‘other’ category of devices in this chart have Google services on them, according to Enders analyst Benedict Evans — so you could say that while Google’s platform is huge in China, Google itself may have far less influence than Android’s spread suggests because such a large swathe of locally made Androids are cut off from its services and thus can’t generate advertising sales for Mountain View.

In a recent blog post discussing Google’s failure to deliver any Android activation data since September 2012, Evans also notes that: “The great majority of Android devices sold in China, which are probably a third of total Android sales, come with no Google services installed, including no Google Play, and hence are not even included in Google’s activation numbers, since signing into Google Play is what counts as ‘activation’.”