Are you noticing that some things are a bit different today? People in cafes are actually talking to each other, no laptops in sight? Drivers at stoplights are accelerating as soon as the light turns green, without that “oops I was just finishing this text” lag?

Don’t panic, you haven’t been somehow transported back to 1995 (though that might be kind of fun, actually.)

We’re in the middle of the National Day Of Unplugging, an annual 24-hour event that began back in 2010 and starts at sunset on the first Friday of each March, inspired by the ancient ritual of observing the Sabbath or Shabbat.

If you’re reading this, you’ve obviously failed at the whole thing already. But there’s always next year, or even next week. It’s a pretty straightforward idea, and you don’t necessarily need to sign a pledge to do it.

The National Day of Unplugging’s website says the goal is simply to “unwind, unplug, relax, reflect, get outdoors, and connect with loved ones.” According to the ten principles of the event embedded below this post, signing the pledge means that you vow to put down the phone, shut your laptop, light some candles, and open some wine. It might sound easy on paper, but thinking about putting it into practice can be pretty difficult.

This week I had a drink with a very successful web entrepreneur who told me she observes a full day of unplugging with her family every single week. She’s a bit older than me, though, and has already had a lot of success at work and built a rich personal network of friends and family. I told her that I couldn’t see myself being able to completely unplug on a weekly basis without having negative repercussions in my career or personal life. “What if someone is inviting me to some amazing last minute party?” I asked. “What if a source emails me with Twitter’s secret IPO documents?”

“It’s ultimately about creating boundaries for yourself, which everyone should do,” she said. “Your career and life will actually be better for it in the long haul. Trust me.”

She makes a good point. For decades before the current “always on” era, many people were able to build great lives and careers for themselves despite not being accessible for 24 hours a day. Though right now the trend is toward working harder, faster, and longer than ever, it might be worth remembering that the people who have historically made really big impressions on the tech industry and the larger world spent a few more hours each day in relatively unplugged solitude than we typically do today.

Stepping away from the gadgets and the web for a few hours here and there might not be a terrible idea after all. If for nothing else, it will prove that we can still remember how to survive without them.

Here are the ten principles of the National Day of Unplugging: 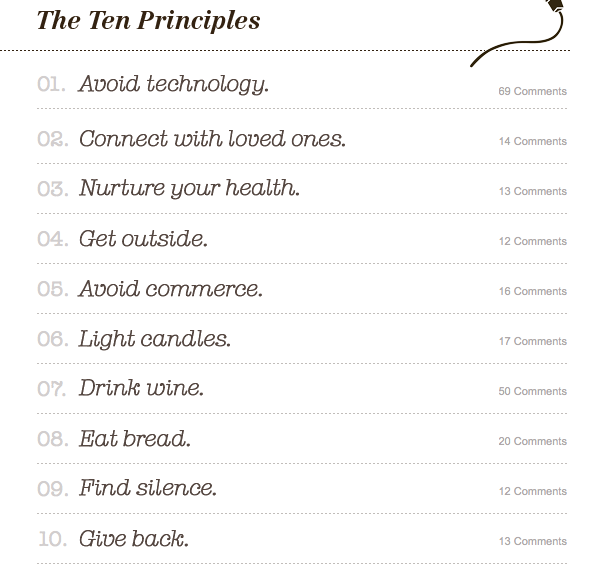