Editor’s note: Jacob Mullins is a VC at Shasta Ventures who primarily focuses on consumer web and mobile companies. Follow him on Twitter @jacob.

With the recent talk about the growing “billion-dollar club” in startups, I’ve been wondering, as a Series A investor, what characteristics a $1 billion consumer tech company has. I examined the pool of consumer companies that have had exits over $100 million within the current era of consumer tech, which I consider to be post-recession 2008. I wanted to see what I could learn and ideally reverse-engineer common characteristics that would help me identify the next big winners when I see them today or in the future.

I created a dataset pulling from a number of venture capital data sources, including CrunchBase, and narrowed it down to my own specifics: U.S., venture-backed companies that have had realized outcomes, both IPO and M&A, over $100 million since 2008. Because private-equity funding and M&A details are less clearly reported, this may not be a comprehensive list of consumer companies. Also, I did not include software/enterprise companies, of which there are many more. 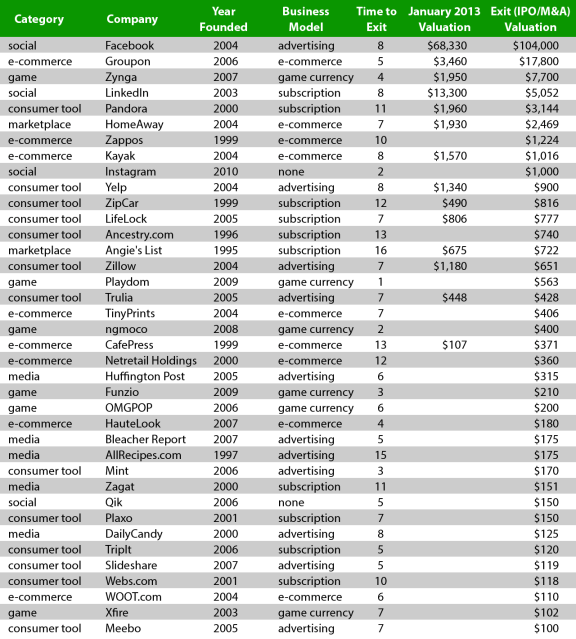 Here are a few highlights:

This simple survey affirmed my belief that achieving outsized results within the consumer company landscape is incredibly difficult. Now that we’re sure it’s difficult, what insight can we glean?

The average age of the nine companies that exited at over $1 billion is seven years, with the minimum being two years (Instagram) and the maximum being 11 years (Pandora). The average age of the 38 companies that exited over $100 million is 6.9 years. Instagram, Playdom and ngmoco are the three outliers who had significant outcomes, $1 billion, $563 million and $400 million, respectively, within two years of their founding. All were fast-growing and sold opportunistically.

To build truly large and valuable businesses, do not expect a short-term play. Plan to be in it for the long haul — the better part of a decade — and build out a team that is willing to dig in and fight hard.

At first I was hoping there would be a certain category or type of company that would stand out, but unfortunately, there’s not. However, the fact that huge opportunities are possible in nearly every category is a positive attribute.

I placed the larger set of 38 companies, which exited over $100 million, in one of five categories and got the following counts: social (4), e-commerce (8), consumer tool (13), gaming (6), marketplace (2), and media (5). It appears that consumer tool is the largest category, but it’s also the broadest categorization, which includes everything from Mint.com to ZipCar.

Two of the top five companies, LinkedIn and Pandora, have more than one business model that significantly contributes to their top line – advertising and subscription. Of the nine that had $1 billion exits, four are e-commerce-based, three are advertising-based, and two are subscription-based.

Across the 38 consumer exits over $100 million, advertising is the most common business model at 11 companies; second is subscription, with 10 companies; and third is e-commerce, with nine companies. Game Currency has six companies, and two companies — Instagram and Qik — exited with no business model.

I’m not surprised that advertising is the leading business model category across the list given its broad applicability. Though I am happy to see that subscription is the close second, which demonstrates the strength and importance of providing consumers with enough value that they vote with their wallets. While e-commerce is also well represented, the average exit multiple (1-2x revenues) tends to be smaller than other tech company exit multiples, as reported by the Goldman Sachs Internet Technology Quarterly Report.

The most valuable companies have founders who have unusually strong and focused product vision. They are intimately engaged in every aspect of product development ensuring the product instantiates itself in their image.

As you look down the list of the nine $1 billion+ exits you recognize that there is a strong common focus on end-user value, each in its own way. Facebook is better at connecting friends; LinkedIn makes professional networking and the job search easier than ever before; Zynga gamified life with your friends; and Pandora plays only the music you want to hear. Not only were these companies able to acquire new users, but they were able to keep users around for days, weeks, months and years after they signed up. They did this by focusing on constantly providing their users value at every step.

From the nine $1 billion exits, there is not a clear enough trend to say whether or not it’s more valuable to invent an entirely new product category or reinvent a market with a better product. Facebook provided a better experience than Myspace and Friendster. Zappos sold shoes in a better way, with better customer service. Instagram, however, created the mobile photo sharing market, and Pandora invented and wrote the rules for Internet radio.

As an entrepreneur with a revolutionary idea, don’t be turned away because there are competitors in the same space. In many cases, the most valuable products have been built-in areas where the existing solution is just not up to snuff.

After looking through many of the common characteristics of consumer tech companies that have had large outcomes of between $100 million and $1 billion, three things stand out. First, prepare to go for the long haul: Work with teams who are both visionary and tenacious enough to execute on their business for the better part of a decade.

Next, work with founders who have strong product sensibilities and a deep vision for how they see their products unfold and how it constantly provides value to end users at every turn.

And finally, billion-dollar companies can be created in categories and with business models that have been seen before. Don’t be fearful of the competition or the entrenched players. If you can do it better, you can win.