If you are based in the U.S. or Europe, there’s a good chance that you haven’t yet heard of Cubie Messenger. Here in Asia, however, the free mobile messaging app, which lets users exchange text, stickers, videos, and their own drawings, is gaining plenty of traction. Since launching in March 2012, Cubie has been downloaded 5.5 million times, with most users based in Southeast Asia and the Middle East. The Taipei, Taiwan-based company joined 500 Startups back in October and is currently learning how to market the app’s particularly Asian brand of fun and humor to American users.

Founders Cjin Cheng and Yenwen Feng started Cubie in September 2011, originally intending it to be a side project to tap into the mobile app market. This is Feng’s third startup since 2004: the first one was a mobile stock trading app for Java phones called willmobile that was acquired in 2007, and the second is social gaming company Gamelet.com. 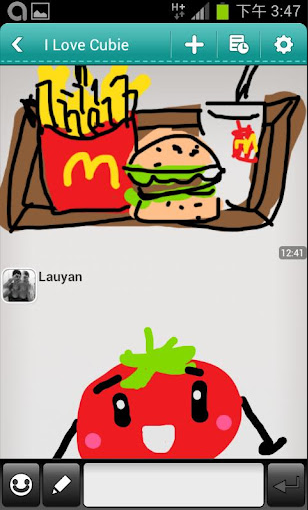 Cubie sets itself apart by giving users lots of options to generate their own content from a single screen, including drawings, voice messages, and animated stickers that they can purchase from Cubie’s in-app store. A future update will allow users to search YouTube from within the chat window, one feature that has been frequently requested. Animated stickers include sets based on characters from popular anime series, like Tokyo Romance, while others feature Cubie’s own quirky characters, such as Unicorn Bob. More artistically-inclined users can publish their drawings to a public forum within the app called Cubie Space.

“We saw that many users have drawn incredibly detailed and interesting pictures as well as silly scribbles. This in turn led us to add the latest features, such as text bubbles and using our animated stickers as decorations, to make it even easier for people to get creative,” Cubie International Messenger James Hill tells me.

“We noticed early on that [Southeast Asia users] were more open to sharing their contact information (Cubie ID) on social media, and inviting users that they may know through their Twitter and Instagram, but not necessarily in person,” says Hill. “What we’ve also realized is that Southeast Asia is not one homogeneous market, there are vast differences between users in Singapore and those in Indonesia, for example. The infrastructure and the way people use and pay for their mobile usage varies greatly.”

“Another important factory was being featured on a TV channel in Thailand, which took us to the number one overall app in that market almost overnight,” he adds. “Traditional forms of advertising also seems to be useful, so anyone thinking of entering those markets should take that into consideration.” 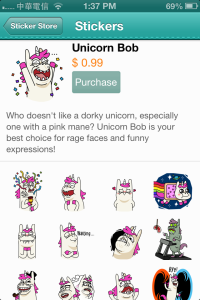 In addition, co-founder Cheng says that the company wants to get in touch with regional carriers to explore possibilities regarding data plan packages, since in many emerging markets most users are on prepaid plans, making data usage an issue.

Cubie is now keen on tackling the U.S. market, though the company notes that the app currently tends to attract American users with niche interests, as opposed to in East and Southeast Asia, where Cubie has more mainstream appeal.

“We’ve featured some of our U.S. users on our blog and we realized that their tastes and hobbies are quite niche, such as anime and Asian-style cartoons, which is something we can definitely provide,” says Hill. “Going forward, we’ll be looking to reach more mainstream users, either through functions we add, the stickers and emoji we design or license, and by adding other things that appeal to people in the U.S.”

The company also has its eyes set on Japan, where it is working with content providers to reach users. Cubie hopes to leverage the connections and expertise of its Japanese investors. The company’s seed funding round last year raised $1.1 million from Japanese investors B Dash Ventures, NTT Investment Partners, NEC Biglobe, and Gumi Ventures, as well as 500 Startups and Pinehurst in Taiwan.