Arro, a new mobile shopping companion app for iPhone, is publicly launching this week with a different idea about how to help shoppers in store aisles make a quick decision on whether or not to buy. Instead of focusing on price matching or personalized product recommendations, the app gives users a shortlist of the top five choices, based on its analysis of millions of online reviews.

There are a lot of apps in the mobile shopping space, so the distinctions between Arro and others is important.

Explains CEO and co-founder Manish Vij, when you’re at the store, you don’t have time to wade through Amazon reviews. “Arro tells you whether you should buy the model you’re looking at or whether there are better choices,” he says. “And it makes it easy to help a friend who’s at the store and needs advice: simply tap the products you want to share,” Vij adds.

The app first launched into beta in the beginning of November 2012, with just 10 categories to start collecting user feedback. Now that it’s going public, the app has close to 100 categories available. During the beta, 1,500 users tried the app, but the dominant feedback (around 95 percent) said their main complaint was that it didn’t have enough categories. That problem has now been addressed. 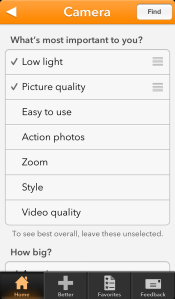 As Arro is now publicly launching, its focus is on high-level categories like electronics, fitness, personal care, appliances and baby products. As you drill down into one of the nearly 100 sub-categories, you’re prompted to tell the app what features are most important to you, in order to help it fine-tune its recommendations. So for example, if you’re in Cameras, the app has you check off and rank things like “easy to use,” “picture quality,” “style,” “zoom,” “pocket-sized,” or whatever other things are important to you about your camera purchase. You can also drag a slider around to tell Arro what you’re looking to spend.

When you’re ready to see Arro’s shortlist, you just hit the blue “Find” button and the app returns a top result and five others. The data the app uses to determine its recommendations comes from crunching the reviews left at over 6,000 online stores, where shoppers detail a product’s various strengths and weaknesses. While reviewing your results, you can view photos, read snippets to linked to the full review on the source’s website, view ratings, favorite items, or click a link to be redirected to an online store to buy the item (e.g. Amazon) which opens up directly within the app.

If you’re still a bit unsure, you can tap the “Ask Friend” option instead, which allows you to reach out via Facebook (on iOS6), Twitter or email.

As noted above, there are a lot of services out there in this general space, including search, recommendation and comparison engines like Google’s, Wize, ShopSavvy, RedLaser (from eBay), Amazon’s Price Check app, and more. But Arro’s closest competitors include Decide.com, Find the Best and Sortable. 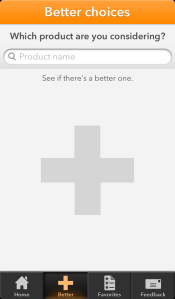 Arro argues that its narrower focus on product reviews written by owners is the advantage here, but that’s not necessarily true. Decide, for example, uses product reviews in combination with expert advice to make similar recommendations, and it was built by former Farecast engineers who have repurposed those “price dropping” algorithms to not just tell you the what to buy, but also when. That’s very helpful. Sortable, meanwhile, provides a handy service in that one of its better features is the ability to pit two products next to each other, to compare them side-by-side. Find the Best also taps expert advice, and has a broader focus than just products, extending into areas like health, travel, cars, and more. It’s fair to say that each of these competitors has a viable niche, actually.

What Arro does have going for it is that the app is really well-designed. It’s attractive, simple and straightforward, and very easy to use. Though I might not have always agreed with its number one recommendation, when testing with products I owned, I often found the one I purchased in the top five. At the very least, it seemed to be a useful way to get some quick recommendations on categories where you might have otherwise struggled to even know where to begin.

On Monday, Arro will release an update to its app which introduces a “get this, not that feature,” which will allow you to tell it the product you’re considering buying, and it will tell you whether it’s a go or not. And if not, it will make alternative suggestions, based on the product you were considering.

The Palo Alto-based company has a bit of seed funding, which includes investment from Scott Crosby, co-founder of Urchin, now COO at Euclid. Other investors detailed here on AngelList include Kai Huang (RedOctane co-founder), Nick Mehta (CEO at LiveOffice), and more.