Deutsche Telekom, owner of T-Mobile USA, today reported its Q4 and full-year results, and it looks like it is starting to arrest some of the declines in its North American operations: overall subscribers at T-Mobile USA now stand at 33.4 million — a rise of 0.6% compared to a year ago, and the first time since 2009 that the number has not declined. The company, however, also noted that “challenges persisted unchanged” in the region as revenues declined by 1.4% to to €3.8 billion ($5 billion) and service revenues specifically were down by nearly 10% to $4.1 billion, as the carrier sits tight and waits for a marketing deal with Apple to kick in this year.

T-Mobile needs more scale in the U.S. to better compete against bigger players like Verizon and AT&T, particularly after AT&T’s attempted T-Mobile acquisition was abandoned after regulators got involved. To that end, T-Mobile is looking to scale up its U.S. business with a MetroPCS merger, which will be seeing a vote from MetroPCS shareholders on March 28.

Part of the problem with T-Mobile is that it has carved out something of a position as a budget carrier, as evidenced by the fact that its contract customer base — traditionally higher-spending customers — continues to decline. In 2012, the carrier said that the number of branded contract customers declined by 2 million to 20.3 million. On the other hand, branded prepay customers were up to 5.8 million. It notes that monthly prepaid customer ARPUs are $27.70, which is only half the revenue of a contract customer.

Up to now, T-Mobile’s U.S. network has not been able to support the iPhone and so it has missed out on a lot of the Apple smartphone lift that AT&T, Verizon, Sprint and others have had. That is due to change in about three or four months’ time when the company begins to roll out its new LTE network, and in connection with that begin a “joint marketing of products” agreement.

The company has not yet revealed what this will entail but it may not be a budget play: the company is also committing to reducing handset subsidies in an effort to improve its margins. Its “Value” plans for contract customers sell phones at full price, with payments made in installments over 20 months. It says that 30% of its contract customers (branded, not MVNO partners) are now on these plans, and that 60% of these contract customers are on its 3G/4G plans. 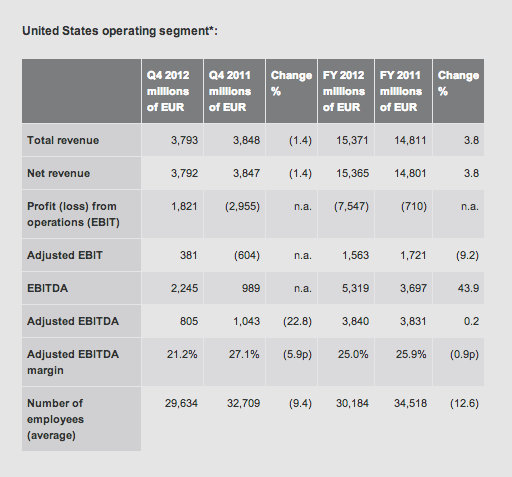