If you’ve been to a live event recently, like a football game or a, you’ve probably noticed that the majority of people around you spent most of their time huddled over their smartphone. It’s true of life now, too, as people now interface with the world through Instagram rather than their eyeballs, but this even more true for live events.

BuzzMob launched in 2011 to capitalize on our mobile obsession with a location-based fan engagement app, designed to help facilitate and channel the social chatter at live events. The app aims to create a more engaging experience at live events by offering a focused, virtual community message board, which allows users to tap into a realtime community feed of images, tips and status updates from fellow event-goers.

From the beginning, Buzzmob’s experience has largely been focused on individual users, on allowing fans to create these targeted virtual message boards (or “Mobs” as Buzzmob calls them) around certain locations. But today, the startup is extending that capability to event organizers, brands and sports teams themselves in what the founders tell us is the app’s biggest update yet.

With Buzzmob v2.0, the startup wants to beef up its capabilities for venues and other high-traffic destinations by allowing them to quickly create their own virtual communities around their live events — which, as the case has always been, are focused around location and shared interests. Through its new mobile platform, Buzzmob essentially allows brands and event organizers to curate these realtime conversation feeds, video streams, exclusive music, movies and event photos, while leveraging that stream to distribute offers, trivia and promotional giveaways.

Naturally, the idea is to give brands a better way to connect with their customers, rewarding loyal fans with swag and presumably giving them a better shot at creating lasting relationships with actual people, not just “a fan base” segmented generally by demographics. The idea is to be one part social/mobile CRM, one part mobile content distribution and loyalty platform, and one part event utility.

In terms of the latter, Buzzmob provides an ideal medium through which venues could share floor plans, a music festival could share directions to First Aid or bathrooms, tell fans where they can find a band’s music or merchandise after a show, and so on. To that end, Buzzmob now allows event organizers and brands to acces realtime analytics and administrative tools through an events dashboard so that they can manage their fan base and see how much value they’re getting out of particular deals or pieces of content. 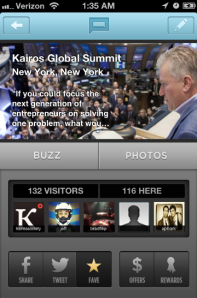 For businesses, in the big picture, this means being able to curate and control attendee submissions to their own feeds, which is naturally something brands are eager to have — and something that few other apps or platforms offer. By offering this new form of mobile advertising (and engagement) for live events, Buzzmob has attracted brands and events like the AFI Film Fest, Stan Lee’s Comikaze, USC Alumni Association, Global Green, the Kairos Society, and others.

“Our new mobile experience and partner toolset in the latest version of BuzzMob has allowed us to begin working with a number of venues, stadiums, sports teams and high-traffic locations,” CEO Jeff Jackel says, although he declined to share more names for legal reasons.

To help it develop the brand and event side of its mobile engagement platform and to help oversee the development of its new app, Buzzmob recently announced that it has recruited Shawn Kernes, a co-founder of ticketing platform StubHub, who joins as its new CTO. Starting in January, Buzzmob has been leveraging Kernes’ veteran knowledge of the events (and retail) spaces to help it secure partnerships with venues, brands and event organizers.

Kernes was the co-founding CTO of StubHub and helped lead the company to its acquisition by eBay in 2007, where he then spent a year as a senior director of product development, before going on to become the COO of Cash4Gold and the CTO of Beyond The Rack.

Its new app and CTO aside, Buzzmob is hardly alone in the social, location-based space, thanks to startups like Banjo, Mixer and Glassmap — and many more. What’s more, Yobongo was scooped up by Mixbook early last year and social activity service Hot Potato was acquired by Facebook (and then shut down). Facebook, Foursquare and Twitter have also been making strategic moves into this space.

However, the startup believes it has a leg up on the competition — and realtime community forums like event hashtags on Twitter — by focusing on filtering out the noise and allowing users to exclusively tap into the content and conversations they care about as they watch an event. From the outset, Buzzmob has been focused on sports events and concerts, which has helped give direction and focus to its event-centric model and will help it compete against the bigs like Twitter.

“The real focus for us,” Kernes tells us, “is solving the content consumption and engagement problem at live events. Only a small portion of social media content is actually consumed by anyone, there’s just a lot of noise, so we’re focused not on random content creation, but content that’s actually focused on the needs and interests of the community.”

By doing so, he says, fans get more value out of the content, because it’s actually relevant to them (or at least that’s the idea) and brands know that their content is reaching a loyal fan base and people who actually care about (and will get use out of) that content.

Buzzmob has raised $2.6 million to date from Craig Cogut of Pegasus Capital Advisors and a flock of angel investors.