For small businesses, buying and managing health insurance is a “pain in the buns,” to quote my new favorite ad. Not only are its complicated terms, lack of transparency, slow quoting and on-boarding process and paper trail a pain in your buns, but health insurance can be a massive pain in your wallet, to boot. Hidden costs are everywhere.

Y Combinator-backed SimplyInsured is launching today with a solution. Founders Vivek Shah and George Huo, who were also both early employees at YC startup Cardpool (which sold to Blackhawk Network in late 2011), have built a simple, online health insurance manager and quote engine for small businesses, which aims to explain in plain English what is or isn’t working about your current plan and help you identify hidden costs and cost-savings.

SimplyInsured analyzes thousands of insurance policies in an attempt to find small business owners the best coverage, price and value for their unique needs, in turn, handling all the forms and paperwork automatically and paperlessly that help you get a new plan up and running quickly. Of course, if the concept behind SimplyInsured sounds at all familiar, that’s because the startup shares a similar mission with another recently-launched Y Combinator company, Zenefits, which we covered last week.

Sure, that makes for a potentially awkward situation for Y Combinator and for both startups, and, honestly, it’s surprising that this doesn’t happen more often. YC founder Paul Graham says of the situation:

We’ve had this happen before, though not to this degree in the same batch. Companies evolve, so unless you dictate their ideas to them there is always some chance that two companies you fund will compete. E.g. Google and Apple have become competitors, and few would have expected that. But while this is an awkward situation, we have procedures for dealing with it, and we know from office hours that they ended up in the same spot by evolution and not because one copied the other.

While there is most definitely overlap, both startups have taken it in stride thus far, welcome the competition and the opportunity to learn from the success (or slip-ups) of the other, as they set out to build differentiated health insurance managers. When asked to describe how SimplyInsured is looking to set itself apart from its fellow Y Combinator startup, Huo and Shah say that they’ve opted to approach health insurance from the consumer’s perspective — in other words, the driving questions they want to help small businesses answer are, for example, what medical issues are you worried about and how much will they cost? 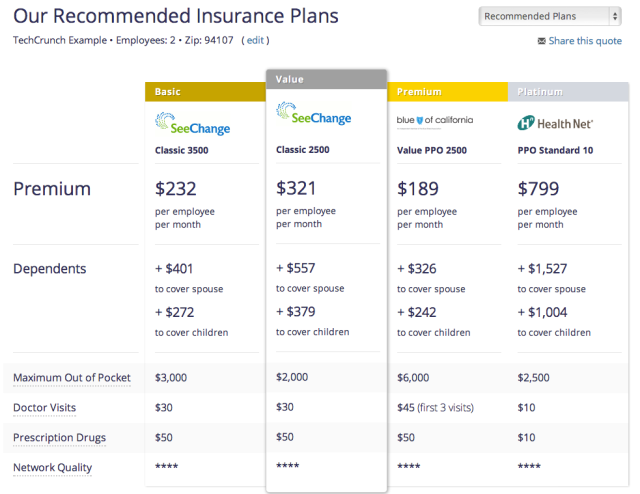 Rather than offering a one-stop shop for managing a wide range of employee benefits (as Zenefits has sought out to do), the startup’s software estimates the cost of having a baby or going to the emergency room, the particular procedures and scenarios, which the founders believe are ignored by the majority of health insurance brokers. By providing deep comparisons — not just premiums and maximums — SimplyInsured wants to eliminate the fear (and FUD) around the hidden costs inherent to health insurance purchasing, while actively guiding companies to the best, personalized coverage and plan(s).

Of course, Zenefits and SimplyInsured are not the only startups tackling this long-standing problem, nor are they the only ones looking to bring the process online. Both Cake Health and Simplee share similar mission statements (to a degree), but the SimplyInsured co-founders are of the mindset that Cake Health and Simplee are targeting the latter half of the problem. That is to say: The startups help individuals and small businesses save money once they’re already struggling with bloated, cost-heavy plans.

While downstream cost-savings is a valuable service in and of itself — and one that SimplyInsured offers at launch — the company is also looking to help its customers save money during the purchasing process, Shah tells us, which he believes will lead to a larger net savings (and lower bills) down the line.

Differentiation aside, how does SimplyInsured work, you ask? Essentially, the startup’s service works in three steps. First, SimplyInsured helps small businesses find and identify the plan that best fits their particular needs. Traditionally, this process requires business owners or founders to set up in-person meetings or calls with insurance brokers and, while this provides the security blanket of being able to talk to intermediaries face-to-face, it’s inefficient and takes time.

Instead, SimplyInsured has opted to bring this online and automate the process, developing algorithms that surface relevant information based on a company’s needs, while offering a greater degree of price transparency — or at least that’s the idea. Essentially, it’s similar to the difference one experiences in booking flights by calling a travel agent versus using Hipmunk or Kayak. 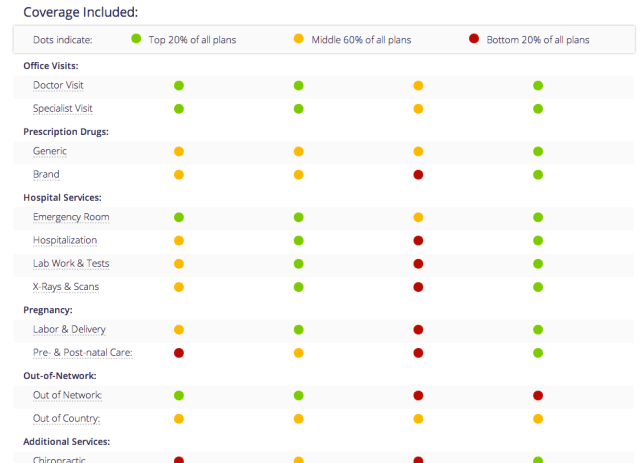 Next, once the right plan is identified, the service automates the on-boarding process (like Zenefits) to help streamline how companies sign up and activate each of their employees. Usually, this involves a lot of paperwork, faxing and brokers driving to your offices with a stack of forms to sign. Again, like Zenefits, the startup is making this process completely paper-free, allowing businesses to complete the process online in 10 minutes, rather than two weeks.

Lastly, SimplyInsured attempts to simplify the ongoing administration of the plan through a one-click on-boarding process and by making it easy for companies or employees to switch plans at any point in the future.

Once Obamacare (or the PPACA) goes fully into effect in 2014, there is an expectation that the new state health insurance exchanges will create increased competition among insurers for the average small business customer. The Act requires insurers to offer an online product and also reduces the overall commission brokers can claim from small business clients. Under previous legislature, these commissions were already reduced to seven percent, and while this means increased competition for fewer dollars, the co-founders expect that many traditional, offline brokers will struggle to make the transition and may not survive.

In the post-Obamacare world, Shah says, only the low-cost providers will be able to survive, which means there could be a big reduction in the number of agents in the U.S., which now number around 400K. Built in the new era of the 7-percent-commissions mandate and with a process that is online from the get-go, SimplyInsured (and Zenefits as well) believe they’ll be well-positioned to weather the changes, even if commissions are reduced further. For an online business like SimplyInsured, the margins work in their favor.

The founders tell us that early users of the platform (they currently have several dozen clients) have found they’ve been able to make savings in the range of $500-$1,000 per person on their health insurance, which, if they’re able to maintain an average on the higher end of that spectrum, will put them in a good place. And it will be a boon for small businesses in particular, who tend to be the ones hit hardest by health insurance costs.

SimplyInsured is already integrated with payroll services (something Zenefits does as well) so that it can further automate the process of employee deductions for insurance. Going forward, the founders believe that, in focusing on individuals, they can help business owners root out the specific issues they have with their plans (or will need coverage for), and can help them find increased savings. 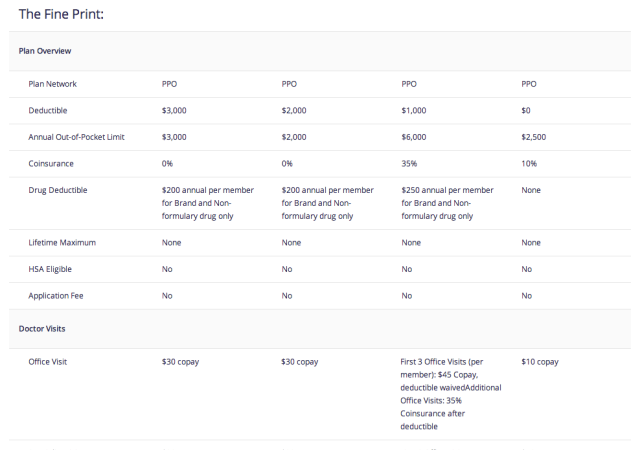 In building their algorithms, the team found that there are tons of hidden costs in the terms of each specific injury, and, because hospitals don’t share the prices for treatment, this requires them to essentially go through the whole plan step by step. The startup has written its algorithms to automate this process, reading insurance plans one-by-one and step-by-step to tell users what they will be paying if, say they break their leg, under the terms of each plan, allowing them to easily compare the candidates. (You can see the results/examples of that comparative analysis in the images embedded above.)

This is really the key and the biggest value-add that SimplyInsured provides over its competitors; the ability to drill down into each part of a potential plan and compare them to others adds a whole new level of transparency to the process.

And, in the end, because there really isn’t a primary, go-to online insurance platform today that’s well known and widely used, both Zenefits and SimplyInsured stand to benefit handsomely from this dearth of transparency if they play their cards right. Plus, this is a big enough problem that affects enough businesses, that there is plenty of room for both to build sustainable businesses. Of course, that’s easier said than done.

For more on SimplyInsured, find them at home here.