When we last caught up with Getable, the startup formerly known as Rentcycle, it was announcing that Netflix co-founder Marc Randolph was joining Collaborative Fund founder Craig Shapiro and OpenTable founder Chuck Templeton on its board of directors.

Behind a board familiar with the online rental and reservations business, Getable moved away from its initial mission, which was, essentially, to become the Amazon for the entire rental industry, helping to bring thousands of brick-and-mortar, mom-and-pop rental shops online — from ski shops and construction equipment businesses to those renting bouncy houses. The startup approached the market with a P2P, consumer model, allowing people to easily search, compare, and rent anything and everything online.

Then, early last year, it became Getable and began to more actively follow the OpenTable playbook, shifting more in the direction of a B2B services provider (while maintaining its consumer directory and booking tool) by offering an in-store rental management solution for small businesses. The part software, part hardware solution aimed to help merchants and small business owners manage their reservations, organize inventory and so on.

But that didn’t quite stick either. Today, Getable is shifting directions yet again, moving to a pure B2B model, abandoning its P2P, consumer approach, while going mobile-first. Not only that, but Getable is significantly narrowing its focus within the rental market to what Getable founder and CEO Tim Hyer tells us is the largest segment of the rental industry: tools and equipment. In fact, the startup’s new service is exclusively geared to general contractors and to those who rent their construction equipment.

This means, of course, that Getable’s addressable market has shrunk significantly. Sure, there are over 10 million general contractors in the U.S., and the tool and equipment category represents a $32 billion market and one that’s projected to reach $46 billion by 2016. However, while that’s still a sizable market, it’s a fraction of the $85 billion rental industry that Getable was initially targeting when it launched as Rentcycle back in 2009.

Well, the lesson here is that you have to keep moving until you find peak demand and product-market fit, even if that market is smaller than you’d originally hoped. Hyer tells us that, over the last year, the tool and equipment industry has far and away been its most active and loyal category, so Getable is now moving in what he sees as a different, but related direction: Solving the inefficiencies in the tool and equipment rental space with a dose of mobile technology.

Granted, when a startup pivots multiple times in the course of its first couple of years, it’s bound to make investors, customers, writers and the company itself a little nervous. Traditionally, pivots, although often trumpeted by the media as brilliant, positive strategic moves, are, of course, inherently a sign that the startup was ill-positioned from the start, isn’t finding much traction and may even be on its way to the deadpool.

On the other hand, generalizing is a dangerous sport, and each case is unique: Oftentimes, changes in direction or pivots (to go with the over-used buzzword du jour), are just what a stagnating company or product needs to jumpstart its business and rejuvenate its team. Many entrepreneurs will tell you that pivoting or tweaking until a startup finds product-market fit is not just advisable, but the best course of action — depending on the concept, the team and the market itself, of course.

But, pivoting, like acq-hires, do have a tendency to be overplayed as “wins” for the startup in question, when in reality, an acqui-hire or a pivot inherently represents “settling” or “failing” — seemingly harsh even for the world of startups, where 90 percent of the game is failure.

In Getable’s case, Hyer says that he is relieved, as he believes that the startup has finally found a problem their solution can address effectively, and pent-up demand that scalable mobile technology can uncork (potentially with high margins to boot). The founder also tells us that, over the last several months, Getable has received a couple of acquisition offers, which, if he and the team didn’t believe had gold at the end of the tunnel, might have provided the impetus to sell and try again.

It also helps that the startup’s investors are on board and willing to back its new direction. Getable quietly announced today that it has closed its second round of financing — a bridge-style seed round of $1.8 million — which brings the startup’s total funding to $3.2 million. Investors in the round included Andreessen Horowitz, Founder Collective, Promus Ventures and Chris Sacca of Lowercase Capital — who has also backed companies like Uber and StyleSeat. 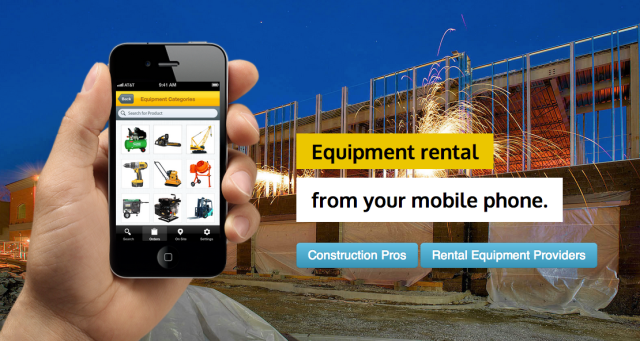 The startup will use its new capital to beef up its engineering team and build out its mobile product for contractors. The new construction rental product is currently in alpha mode, as it works with a few strategic partners on product development, Hyer tells us.

The iPhone app will be designed exclusively for contractors to help them complete equipment management both on and off the job site, including the creation of new reservations, requesting service and maintenance, pick-up and drop-off scheduling and visibility into what’s happening on the job site in realtime. The idea is to build a realtime connection between rental merchants and their customers, the founder says, in much the same way Uber connects its drivers with those in need of a lift.

To help jumpstart its new direction, Getable has hired Mikael Rogers as its new CTO. Rogers was most recently at Yammer, where he was the company’s Developer Advocate. Prior to that, he held positions at OSAF, Mozilla and CouchOne and founded his own startup in Gather, along with being an active supporter of the node.js community and helping to organize and launch the annual NodeConf.

Of course, while the startup is looking forward to getting new blood in the mix, it also means that Getable co-founder (and previously its CTO), Ludo Goarin, will be leaving the company.

Pivots and exits aside, both present and departed co-founders think that Getable is in the process of positioning itself much more effectively and now has the chance to actually build a sustainable, revenue-generating business. Going the B2B route is key — and an underutilized strategic route. Everyone wants to build the $10 billion consumer business, a la Dropbox or Instagram.

“It’s funny, because construction truly represents the original mobile workforce, so it’s hard to believe that contractors and construction workers lack access to great mobile products that help them manage such key components of their jobs,” Rogers says of Getable’s new direction.