Currently, outstanding national student loan debt is over $1 trillion, $864 billion of which is backed by ye olde federal government. According to the Center for American Progress, the majority of those loans have an interest rate higher than six percent — generally speaking, twice the average mortgage rate and is thrice the rate at which the government borrows. In the American education system, student debt is the 8,000-pound elephant in the room.

Tuition.io, the startup formerly-known-as Binksty, is one of a handful of companies trying to give college students some much-needed help in the loan department. A member of Launchpad LA accelerator‘s fourth class, Tuition.io wants to become the Mint.com for student loans by allowing student borrowers to manage their loans from a single interface and by providing a suite of tools to help them find the most relevant repayment options.

After officially launching its public beta six weeks ago, Tuition.io is today announcing that it has surpassed the $250 million mark in aggregate user debt under management and that it has raised $1 million in seed funding from investors that include Mohr Davidow Ventures, early-stage investor Jerry Neumann, New York-based venture firm Mesa+, AF Square’s Troy Carter, Richard Wolpert, Rob Glaser and Launchpad LA — to name a few.

Considering the media buzz around the fact that student loan debt is fast becoming the “new subprime” category, Tuition.io’s concept is timely. More than 37 million people in the U.S. have outstanding student loan debt, including Brendon McQueen, the startup’s founder, who graduated from Columbia with 12 loans of his own.

Of course, given the timeliness of the growing student debt crisis, Tuition.io isn’t the only company tackling this space, competing with young startups like Socratic Labs’ Student Loan Hero, more broadly with debt managers including ReadyForZero, PeerTransfer, SimpleTuition and the P2P lending services like the well-funded Social Finance and the new-ish Pave.com.

To stay relevant in a competitive space, McQueen says that he set out to create a loan management tool that was simple to set up for any user and would allow students to get their loans under control no matter how much they owe or where they are in the payment process.

Tuition.io offers an automated onboarding process to get students started, and then allows them to access all of their loans in one place and visualize debt via detailed charts and graphs, along with a comprehensive calendar of loan payment due dates. The site also creates a personalized action plan for each student, which provide students with better ways to save on monthly payments and tips on how to pay down loans faster, McQueen says.

Since launch, Tuition.io has partnered with socially conscious, student-focused organizations like Student Veterans of American and OurTime.org to help make student debt a bigger part of the public discourse on education in the U.S. To date, the startup is managing over $250 million in debt and over 40,000 loans from borrowers at 130 universities.

As of now, the service is free, which McQueen says will continue to be the case for the foreseeable future. While the startup now has a longer runway with its new seed capital, it will need to begin monetizing at some point, especially as it does not currently originate or consolidate loans.

McQueen says that Tuition.io may charge a fee down the road, or, like Mint.com, leverage its student financial profiles to offer refinancing or other loan services. But, for now, Tuition.io is focused on helping match students with the best loans, rates and providers, find savings and apply for consolidation if/when it makes sense for them. 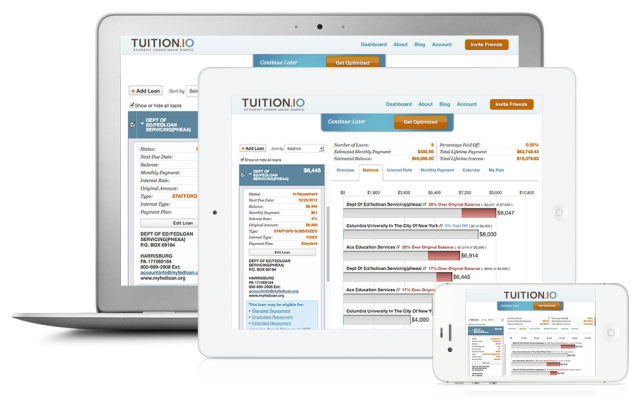