With nearly $70 million raised since its inception in 2005, Practice Fusion has become the frontrunner in the multi-horse race to become the go-to electronic health record platform. When Josh spoke to the startup back in June, it had just closed a $34 million series C financing round, which put its valuation close to $500 million and put it on the path to an eventual IPO.

Meanwhile, a young startup called 100Plus has quietly been on a mission to tap into the rise of the Quantified Self movement in an effort to create a data-rich, personalized health prediction platform, optimized for use while on-the-go. Since its founding in 2011, Practice Fusion founder and CEO Ryan Howard has been acting as a mentor to the startup, working closely with 100Plus founder Chris Hogg as a strategic advisor.

Today, that relationship became a lot more intimate, as Practice Fusion announced that it will be acquiring 100Plus to help “drive forward Practice Fusion’s development of patient-facing tools that use clinical data to provide health insights,” the company said in a statement.

After attracting early attention (and backing from) from investors like Reid Hoffman and John Lilly (via Greylock’s Discovery Fund), Felicis Ventures, Band of Angels and Founders Fund, via Peter Thiel, 100Plus launched at SXSW in March 2012 with the first of two “app experiments,” Outside and 100Proof, which aimed to showcase the impact of alcohol consumption on one’s life span and help users discover and track the long-term impacts of small, healthy behaviors — respectively.

However, it wasn’t until over a year later that 100Plus announced the beta launch of its first “official” iPhone app, which aimed to help users make incremental, health-conscious improvements to their lifestyles. By serving and recommending activities based on your location and preferences (from a community pool of realtime updates from other users), the app aimed to help “users discover healthy activities that they can easily add to their day and tells them how these small, everyday behaviors — like drinking more water, taking a walk down the block — actually effect their lifespan and overall health,” as I wrote at the time.

But, considering the length of time it took to ship its first real product — and the fact that the app still isn’t live, as it was expected to launch on the App Store “in the next month” — there had been rumors swirling that 100Plus was finding a tough time gaining traction and, more recently, had been looking to sell the business. The beta app launch seemed to represent 100Plus’ attempt to make itself more appealing to potential acquirers.

While 100Plus leaders were quick to deny any lagging momentum, a representative did confirm that the startup had “multiple acquisition offers,” but, in considering the close relationship between the two companies, Practice Fusion seemed the best place for them to land to “have the most impact.”

It would appear to be a soft landing for a company that launched with a bang and early buzz, however, given the overlap of Practice Fusion’s near-term needs with 100Plus’ focus on mobile behavioral change, it makes a lot of sense.

Plus, there’s the fact that, along with Ringadoc, 100Plus began as a member of Practice Fusion’s health technology incubator in San Francisco, and since then, the startup has been using de-identified clinical data from Practice Fusion to study health behaviors to determine how they might impact future health and influence individual change.

“Despite the fact that there is no shortage of good ideas, it is incredibly hard to have an impact on healthcare,” says Practice Fusion Associate VP of Corporate Development Patrick Dugan of the perceived value of the company’s first acqusition. “Still, a large number of acquisitions in health technology end with shelving the technology and repurposing people to meet existing needs. But Practice Fusion is interested in the team, technology and product, and we are very much interested in seeing these entrepreneurial ideas come to fruition and effect meaningful change in healthcare.”

Going forward, the 100Plus team will join Practice Fusion as full-time members of its data and product development teams, with founder Chris Hogg assuming the role of Associate VP of Data Science. As to the value of his startup’s exit for its five employees, Hogg says that, the startup will be able to help Practice Fusion develop its new patient-facing tools and “smart products” and reach a much larger scale than they would’ve been able to on their own.

For more on the acquisition, you can find Chris Hogg’s letter to users on 100Plus’ homepage here. 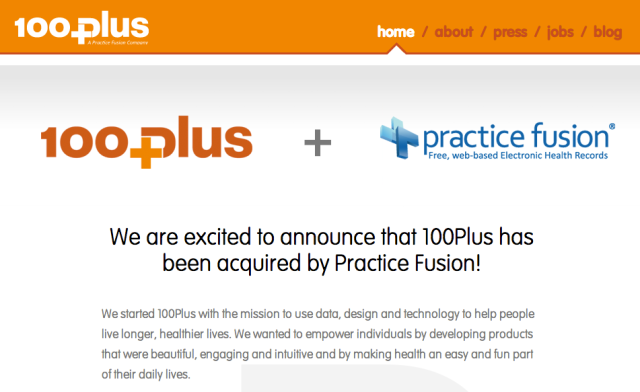