Google just announced a major update to its Google+ platform that aims to replace today’s ubiquitous Google sign-ins on third-party sites with Google+ logins. The new Google+ account-based logins, Google argues, offer far more features than the current Google authentication system, though the older version will continue to be available and function.

The new sign-in features will allow users to sign in to web and mobile apps with their Google accounts and bring their Google+ profile info with them so they don’t have to create a new username and password when they sign in to a third-party application (the parallels to Facebook Connect are pretty obvious here).

The new system will continue to offer features like two-factor authentication and also use OAuth 2.0, but in addition, it will allow developers to add a number of new features, including the ability to let users install their mobile apps for Android with just once click and to allow users to share information like their Fitbit data directly to their Google+ profile pages or to selectively share content from services like Shazam directly to their Google+ streams. 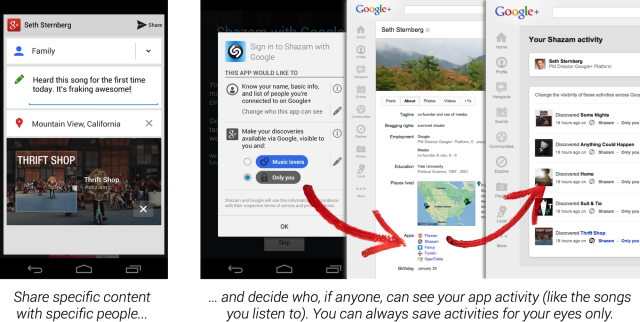 According to Google, there are a few key user benefits to this new sign-in system, which marks the first major release from the Google+ platform group in quite a while. The main feature, of course, is the login system itself, which will be virtually identical to the current Google logins. Indeed, as Google told me yesterday, this was a major design goal behind the project.

All of these new features will launch on the web, iOS and Android (with the obvious exception of one-click installs, which only work with Android). The rollout is scheduled to take a few days.

The really interesting new features, however, are the ones this login system enables.

Google is also introducing new buttons on Google+ for what it calls “interactive sharing” that will allow developers to direct users to the relevant pages on their web and mobile apps to “buy” or “review” products, “listen” to a song or perform any other action on the site. In total, Google will offer more than 100 actions that developers can add to their Google+ posts.

The Google+ team has always said that it didn’t plan to allow developers to just share information to your streams automatically. This, the team always argued, would look like spam. Today’s update stays true to this promise while still opening up the service a bit more for developers who want to share information to your Google+ profile pages automatically.

Google, the team told me, wants to prevent apps and individuals from spamming the news stream on Google+ while still giving users the option to share content with the right people in their circles. In order to do so, it decided that unless users explicitly share any content or other information on their stream, that information will only appear on the users’ profile pages. They can, however, always pick some of this information from their profiles (think songs they listened to or how many steps they took on a given day) and then share it with the rest of their friends on Google+.

Anything a user selectively shares with a specific circle or individual user from a mobile or web app will appear in that user’s notification bar, by the way. This, the team told me, is meant to get as close as possible to ensuring that a message will be seen by the intended recipients.

One of the launch partners, for example, is Fitbit, which will now allow you to automatically share how many steps you take every day to your profile page. Here is what this looks like in practice: You log in to Fitbit with your Google+ account. You then decide which information Fitbit will get access to and which lists and individuals you want to share with the company.

On a service like Fancy, another launch partner, the login will also ask users if they want to install the company’s Android app if it detects that you haven’t installed it yet. For developers, this could obviously lead to more app installs and as Google told me, “it really is like magic.” For now, these one-click app installs are only available for free apps.

Google recommends that developers switch over to the new system, but the old system will continue to work as well. OpenTable, another one of Google’s launch partners, told me that it took its developers a “very short time” to implement the new Google+ sign-ins on its mobile and web apps. Google itself estimates that it will take developers just about an hour to get the basic implementation going and about two weeks for a very deep integration with selective and interactive sharing turned on.