China is now the world’s largest smartphone marketplace, with Flurry estimating that there will be 246 million smart devices in China by the end of this month. It’s a potentially lucrative market for app developers, but almost impossible to crack without the necessary language or cultural understanding to reach Chinese users. Educational app makers, however, have SmarTots to help. Founded in December 2010 by Jesper Lodahl, a former Nokia developer, SmarTots localizes apps and markets them on China’s iTunes.

While the company’s current focus is iOS, Lodahl says SmarTots will also tackle a “very aggressive Android expansion” this year and already has a shortlist of carriers, hardware providers, and developers it plans to work with.

SmarTots announced earlier this month that it has received an undisclosed amount of Series A funding from SoftBank Ventures Korea that will allow it to bring more children’s educational apps from U.S. developers to China. The company previously raised about $1 million in its seed round and its investors include SoftBank’s Pan-Asia Fund, Xu Xiaoping, co-founder of New Oriental Education & Technology Group, AngelVest, ChinaRock Capital Management and SOSVentures.

Since its launch, the SmarTots library has grown to 30 apps and the company says it hit one million downloads in January. SmarTots currently works with a roster of 13 developers from around the world, localizing images, graphics, text and audio for Chinese kids and writing descriptions for China’s iTunes store. Most apps are for children aged three to five, though SmarTots’ target age range is as wide as two to seven.

Before founding SmarTots with chief product officer Victor Wong, Lodahl spent seven years working for Nokia, where he developed four phones (Lodahl holds two patents for technology that have been implemented in more than 1 billion mobile handsets) before taking a position with Nokia China for two years. This is Lodahl’s second startup in China–his first was a Chinese social network called Club Beautiful.

Lodahl decided to found SmarTots with Wong two years ago after noticing how much children loved playing with the then-recently launched iPad. Instead of having the technology isolate individual family members absorbed in their own devices, Lodahl envisioned SmarTots as a way for families to learn together.

“The whole idea came to us after we saw the disconnect, kids geting sucked into the iPad while parents were on their BlackBerries checking emails all day with no one really connecting,” says Lodahl. 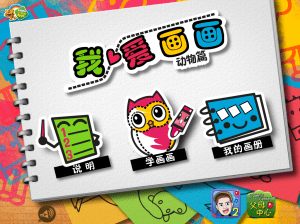 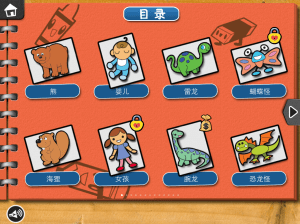 With that goal in mind, SmarTots seeks developers who make educational apps that allows children to create what the company calls “share to mommy” content–in other words, drawing, music and other work that can be sent to the parents’ SmarTots activity feed, which is accessed on the Web or on SmarTots’ app. This allows parents to keep track of their children’s progress on different SmarTots apps and share highlights, like special doodles, with other people such as grandparents.  It also has an educational reporting function that tracks which activities each child is most interested in and gives parents recommendations for more apps from the SmarTots library.

Lodahl tells me that his company is especially keen on creativity-building apps that help Chinese parents fill a gap in their children’s education. SmarTots’ current bestseller is an app called ILuv Drawing (images seen above), developed by MyVijan, which allows kids to trace, color or draw on iPad. A new addition is RokLienz: Rok Out Concert! by Creativity Inc., which allows kids to create their own band, with a singer and instrumentalists, and then make it record a track that can then be shared with their parents.

“If you look at children’s time during the day, when they are not in class, they don’t really have a lot of free time. We focus on apps that expand kids’ creativity. We have drawing apps, music apps, story-telling apps, coloring apps, anything that extends their creativity,” Lodahl says.