A tipster has sent in a screen grab of what appears to be a landing page announcing registration dates for Google’s massive I/O developers conference in May.

Update: Google’s made it official. Registration opens on March 13th at 7am PDT (10am ET). Google+ accounts and Google Wallets are required to sign up.

Historically, the rush for Google I/O tickets is wild. Around 5,000 developers attended the last year’s conference, yet somehow tickets sold out in less than an hour. Demand is so high, in fact, that Google toyed with the idea of turning registrations into a sort of hacking contest, testing devs’ coding skills before giving them a seat at the show.

However, it appears that idea was scrapped, as I/O 2012 was simply a free-for-all registration, just like 2011.

I/O 2013 is slated for May 15 – May 17 in good old San Francisco, and Google has already hinted that registrations would open up in early 2013. Based on this screen grab, early 2013 is looking a lot like a Wednesday in March.

Then again, it’s pretty easy for someone to throw together this image in photo shop. Still, the timing seems to match up well, and with the speed at which these tickets sell out, it never hurts to have the date marked down on your calendar just in case.

Google’s I/O conference is growing to be one of the most important tech events of the year, as the search giant often unveils new products and platforms and introduces new tools to help developers make the most out of “open.” 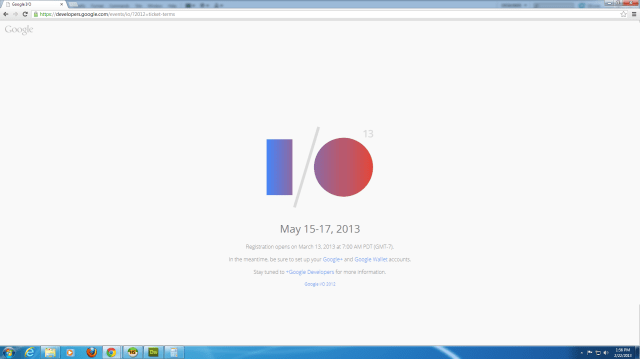