Over the past few years, Vevo has been working hard to simplify the process by which users search for and discover new music videos on its site. With that in mind, the company released a small update to its homepage today, aimed at making it easier for users to check out new music videos and to search for those they know and love.

The latest update to the homepage provides some incremental improvements to the massive redesign that Vevo rolled out about a year ago during SXSW. Interestingly, most of the changes are focused on removing features rather than adding new ones for users to play with.

Vevo SVP of product Michael Cerda told me by phone that the update was designed to provide a more immersive experience for users, and also to help them find the content that they want more quickly. “We decided, ‘Let’s not give people too many places to click around,'” he said. As a result, the company has stripped out some pieces of navigation that were part of the old design. 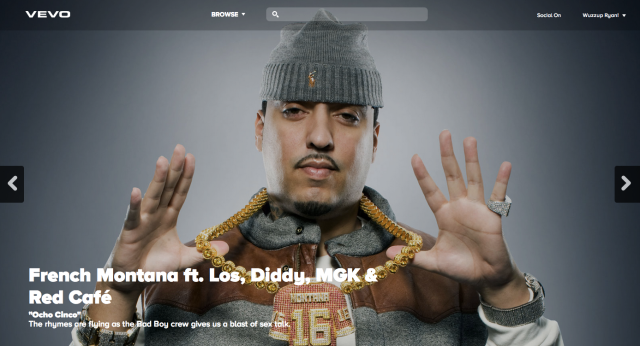 For instance, the company removed the navigation bar and radio buttons that were previously there for creating playlists and discovering what friends were listening to. Instead, with the latest update, all the playlists, friends and video pages are hidden behind the browse button. That provides an unobstructed view of the “larger than life” artist photos that rotate on the homepage. It also simplifies the scroll navigation to discover editorially curated and trending videos below the carousel.

Search is another area that the new design seeks to improve. There’s now an autocomplete feature when users begin typing in the search bar, which reduces the amount of time it takes to find and begin watching a video. “We don’t want to take people from the home page to a landing page,” Cerda said. Instead, the autocomplete function should get them directly to the video they’re trying to find.

Playlists were also an area of focus. While it’s the one feature that users need to be signed in to take advantage of, Cerda said that users will now have better tools for creating, curating and managing playlists. That will let users arrange and rearrange content the way they want to. Doing that will hopefully keep them on the site longer, as they can create and tune into near-continuous streams of their favorite music videos.

All in all, the update is aimed at getting people to discover more and get to what they want faster, Cerda told me.

The new streamlined features come a few weeks before Vevo is planning a major announcement at SXSW. It also was released as the company is in the midst of renegotiating a new deal with YouTube. That would replace the original deal that YouTube and Vevo had, which expired after three years of working together beginning in late 2009. Vevo had no comment on those talks, or the rumor that it is expected to raise more financing, including taking some money from Google/YouTube.