Make way for one more player in the European mobile payments space, and a big one at that. Today, the online payments giant PayPal announced that from this summer it will be rolling out PayPal Here in the UK, its first foray into the European market, equipped with a new piece of hardware to accomodate the chip-based cards prevalent in this part of the world.

PayPal has not set a definite launch date or revealed pricing for the service, but the company tells me it will be “competitive” with existing offers from rivals. The standard fee among them right now for transactions is 2.75%, and two who have recently launched chip readers are pricing them at €49 ($65).

PayPal says that it picked the UK for its first stab at mobile payments in Europe because, with 18 million 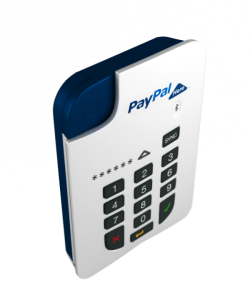 customers (out of 123 million worldwide), the UK is the company’s second-largest market outside of the U.S. And it also has one of the highest smartphone penetrations in Europe — currently at around 61%, according to Kantar Worldpanel Comtech.

Establishing PayPal Here in the UK will be used as a lever for further expansion into the rest of Europe. “We are launching Here this summer but will expand to other markets as we go forward,” noted Cameron McLean, MD of PayPal in the UK, in an interview with TechCrunch.

It also means that David Marcus, the president of PayPal, has a chance to come full circle and finally bring PayPal’s mobile payment service to his own home market. (Coming from France, Marcus founded and then sold his mobile carrier billing startup Zong to PayPal, first becoming head of mobile and then eventually president of the whole operation.)

“PayPal Here has been a big hit since its launch last year, and I’m thrilled that we’re bringing a brand new version that’s designed for Europe and beyond,” Marcus said in a statement. PayPal would not say how much revenue it has generated from PayPal Here in the U.S. but it is one of many different services that it offers to increase touchpoints with businesses and their customers. The company says that in 2012 it processed some $145 billion in payments overall, across both mobile and web.

All of eBay-owned PayPal’s efforts up to now have been centered around a triangular dongle that plugs into an iPhone or Android device to read the magnetic strip on the back of a card — similar to the square-shaped dongle produced by its big U.S. rival Square (which has yet to enter Europe). Europe will see a different approach from PayPal.

To accomodate the chip-based cards used in Europe, as well as the requirements of companies like Visa in Europe, PayPal will be producing a separate chip-and-pin device that will let customers insert a card and enter a PIN number to verify their identity.

This is also the direction that all of the other Square-like European mobile payments companies have had to go as well. One of these, iZettle, introduced its chip-and-PIN reader only yesterday, no doubt to get a little PR jump on PayPal Here (and to get around some of the problems that it ran into with Visa over the use of its dongle).

It may also be the case that while the U.S. still has mag stripes for now, companies like Visa are working to bring the technology to the U.S., so PayPal Here’s European card reader may end up having more currency beyond the Old World.

PayPal joins a number of European-based startups, such as the American Express-backed iZettle; Samwer/Rocket Internet’s Payleven; SumUp and mPowa; as well as U.S. rival Intuit, to tackle the large base of small and medium-sized businesses in the UK (and beyond) that have yet to accept card payments because bank fees on traditional card services have been too high in the past.

The UK becomes PayPal’s fifth market out side of the U.S., where it first launched in March 2012. PayPal here is also available in Canada, Australia, Hong Kong, and Japan — the last of which it operates in a JV with Softbank.

The chip-and-pin card reader will work using Bluetooth connectivity to pair with a merchant’s smartphone to read and then process the card number and PIN code. Merchants will then use apps on their smartphones to both complete the transaction as well as generate receipts. McLean tells me the reader will also be used for more than just card transactions. It will also let merchants log cash and check payments, as well as make PayPal payments.

· Businesses need never again turn away sales because the customer has no cash, and no more lines to deposit funds at the banks

London, 22 February 2013 – PayPal, the company that has been leading innovation in payments for 15 years, has unveiled a breakthrough Chip & PIN version of its award winning global payment solution for businesses, PayPal Here.

The pocket-size handheld device is a game-changer for small businesses. It will enable them to accept credit and debit cards and PayPal payments easily and efficiently wherever they do business – increasing potential sales.

Aimed especially for businesses that have traditionally relied on cash or cheques, the Chip & PIN version of PayPal Here has been designed for use in countries where credit cards rely on Chip and PIN technology, rather than swiping a card, for transactions.

PayPal Here is unique: a complete payment solution that allows any business to simply and securely accept PayPal, credit & debit card payments, log cash and cheques, even send invoices & receipts so they never miss a sale. There’s no contract or ongoing fees, just the initial competitive purchase price and a small fee for each transaction.

Businessmen and women can pair the device with their smartphone to accept secure payments anytime, anywhere they’re trading, whether at a market stall, shop, restaurants, taxi or even in a customer’s home.

David Marcus, President of PayPal, said: “PayPal Here has been a big hit since its launch last year, and I’m thrilled that we’re bringing a brand new version that’s designed for Europe and beyond. We aimed to create game-changing device for businesses in the UK and other nations where Chip & PIN payments are standard. The result is a beautiful device that offers a strong and secure solution for businesses and, as importantly, their customers. Small businesses are the heart of economies worldwide and we are thrilled to launch this product to help them succeed.

“At PayPal, we spend a huge amount of time talking and listening to small businesses. They are the core of PayPal’s business and they’ve told us that they want a simple, secure way to take card payments anytime and anywhere they trade. We’ve used that feedback to create what we think is the best payment device ever created. It’s a great example of our vision for PayPal: a wonderful customer experience from the moment the PayPal Here app is downloaded to taking the device out of the box and accepting a first payment. We’ve even included a ‘click to call us’ button in the app so our customer service team can be reached in one click just in case help is needed.”

Cameron McLean, managing director of PayPal UK, said, “Cash and cheques have served us all well over the years, but businesses that rely on them risk missing valuable sales. PayPal Here will let them offer their customers extra ways to pay, while saving them the hassle of taking cash and cheques to the bank. The arrival of PayPal Here in Britain is the latest example of how we’re helping UK businesses make the most of connected commerce: the new opportunities created by the merger of the online world and the high street.”

Emma Jones, Founder of Enterprise Nation, said, “One of the challenges small businesses in the UK face is getting paid. Cash and cheques seem easy, but soon people start to realise the lack of security, the inconvenience for customers and the Friday afternoon wait at the bank to deposit your money. Equally, many people are put off from signing up with a traditional card processing company because of the high fees, long-term contract commitments and bulky handsets. PayPal Here promises to change all that, by offering start-ups and established businesses a smarter way to get paid, and helping British business to grow in the way that PayPal has already done for many small businesses here and around the world.”

Mark Thomas from Greedy Goat ice cream, a PayPal Here UK launch partner that trades at London’s Borough Market, commented, “Cash is king in the market, but people run out of cash very quickly, and we often lose sales because customers can’t face the long weekend wait at the ATM. PayPal Here is the perfect solution for us, as it gives our customers the chance to pay by card, backed by the reassurance of the PayPal name on the machine. It means more people will enjoy our goats’ milk ice cream this year, which is great for our business.”

PayPal handled $145 billion in payments in 2012 and has more than 123 million active accounts, 18 million in the UK alone.

UK businesses who wish to register interest in PayPal Here can do so at www.paypal.co.uk/here.