Jumio, the Andreessen Horowitz-backed mobile payments and ID-scanning startup, is today releasing a new version of its Netverify product designed specifically for mobile devices, both smartphones and tablets. Netverify Mobile, as it’s called, will allow app publishers to authenticate their customers’ identities via their driver’s license, passport or other ID card.

To do so, all the customer has to do is hold up their identification to the mobile device’s camera. Netverify then uses computer-vision to then “see” what the ID card or document says. The technology is meant to be integrated directly into the sign-up flow or checkout process, where it can serve the dual purpose of confirming identity and auto-filling forms. 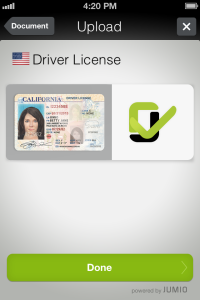 This new introduction complements Jumio’s other key product, Netswipe, a credit-card scanning system which was already made available to mobile developers via an in-app SDK. Now Netverify will do the same, around a year after its desktop web debut, which works using a computer’s webcam. The SDK can be added to a mobile app in around 30 minutes to an hour, the company says. Pricing will be the same as it is on the web – $2 per scan.

For businesses, and in particular financial institutions, online marketplaces and, to some extent, e-commerce sites, the advantage of using a technology like this is that it speeds up the time it takes to verify a user. Explains Jumio CMO Marc Barach, the traditional process for identity verification today is very outdated. “Customers are asked to stop a transaction, and generally fax a document over to some department at the company they want to do business with. That’s a multi-hour proposition,” he says. “We compress that down to about a minute.”

One of the first companies to integrate with Netverify Mobile is San Francisco-based ride-sharing startup SideCar. The company will now use the system to verify its users’ identities, in order to more quickly move them through sign-up. SideCar joins other Jumio customers like Western Union, Travelocity, Gyft, Wallaby, GoPago, and more.

While the technology has obvious appeal to businesses in need of faster, more accurate identity checks, there’s a consumer-facing benefit as well. In addition to recognizing what the ID card says, Netverify can also optionally fill out the form where things like name, address, city, state and zip have to be entered. Whether it fills out the form, or whether it just takes the user to a new page or screen where the info is already entered is up to the business’ own implementation, though. And in some cases, the business will just request that Jumio send a verification check (basically a simple yes/no) instead. 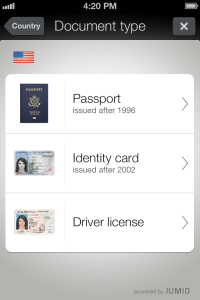 But for online shopping, which has gotten considerably more difficult on mobile with its tiny screens and keyboards, being able to skip a lot of the typing by holding up a card could be useful for consumers, who often dump their carts at checkout due to technological frustrations. This, of course, assumes that Jumio’s Netverify technology is as quick and easy to use on mobile as promised – and the Barach says the company has been working over the past year on this, improving the algorithms and response times to make sure that’s the case.

Longer-term, Jumio thinks about authentication and identity on a much broader scale than what these two products may indicate today. While for now, it’s keeping the products separated, that may change further down the road. “They both do the same thing,” says Barach. “They’re extracting and collecting credential information and validating it, and then pushing it into transactions. That’s where we see the market going, as opposed to splitting things into ‘payment’ and ‘ID.’ We see a more unified view in our products and launches in the coming year. This year will reflect that merging,” he adds.

Barach is being intentionally vague, to be sure, as Jumio doesn’t want to reveal its roadmap. But the next steps could involve things like adding multi-factor authentication into the mix – for example, by implementing authentication methods which include unique device information or a PIN.

End users may just see the technology available today as making data entry easier (though some argue it’s actually easier to type), but in fact, the company is working towards a way to reduce fraud on the web. Barach says that fraud is increasing even more on mobile now, because of the platform’s relative newness. He speaks of a Gartner report which estimates that 1.5% of all mobile transactions over the next several years are expected to be fraudulent. “The real problem to be solved is how do we authenticate that you are you,” he says.”That affects all web users across all applications.”