Barriers to international manufacturing and high fuel costs have long made overseas production painful for small businesses. Now, an economic trend towards American manufacturing has created a timely entrance to the market for Maker’s Row. The startup, a finalist in last week’s Women 2.0 Pitch Competition, says it wants to become a go-to resource to create, well, anything.

Co-founders Matthew Burnett and Tanya Menendez launched Maker’s Row in November to act as a sort of Match.com with Kiva.org-like profiles for factories and facilities. The site enables recognized designers and amateurs alike to partner with manufactures that are searchable on the site by state to create a range of items, from handbags to sportswear. It charges manufacturers a subscription fee to post.

By commissioning their work to be made stateside, brands can then more closely guide processes and prevent their orders from being stuck in transit abroad or in customs, Burnett says. Facilities are using the platform to communicate with one another and find materials, interactions that have surprised even the co-founders.

Maker’s Row sees a sweet spot in getting orders placed by small to mid-size businesses — “people who are serious about making things” — and has raised $75K to date. It is looking to raise $1.25 million to hire backend developers and create more tools to track connections.

Burnett said that cultural and language barriers complicated his work with overseas manufacturers when he was a watch designer for the likes of Marc Jacobs and Izod. “I felt like I was taking a gamble every time I worked with a new manufacturer,” said Burnett. He then started his own collection of domestically made accessories, The Brooklyn Bakery. That is when he met Menendez, who started working on the brand with him when she wasn’t at her day job at Goldman Sachs working on automation projects. 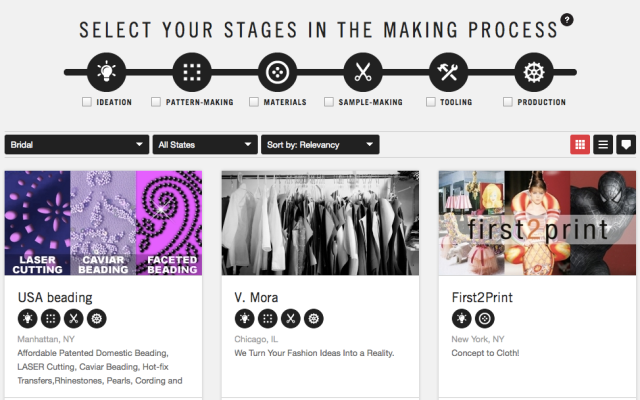 The combination of Menendez’s experience with trying to replace legacy processes and the difficulty the duo faced when searching for strong production partners led to the idea for Maker’s Row. Scott Weiner helped launch the company as tech lead, and the concept for making sourcing more accessible led its three co-founders to the Brooklyn Beta summer incubator program to build the first version of their product.

Alibaba does similar work in China, but connecting designers with domestic sources seems to be a space that Maker’s Row owns. The DUMBO-based company has visually broken out the steps involved in physical goods production, including ideation, pattern-making, and tooling. For manufacturers, this comes with the hope of qualified leads (read: people who want to make things and actually know what they need).

What’s the output so far for Maker’s Row? A “hackathon hoodie” is coming soon from Subrational Clothing Company, which was started by a pair of entrepreneur friends who are commissioning the work of a manufacturer in San Francisco (likely launching the first “slim-fit performance” gear intended for an audience of weekend hackers). Jasmine Aarons’ VOZ Apparel and Accessories has moved production from Chile to NYC thanks to a connection made through the site. And a Kickstarter campaign for Black & Denim may help the startup begin production with Maker’s Row suppliers and contractors in their goal to help revive American textile manufacturing.

Maker’s Row will be riding a wave of word-of-mouth recommendations among designers in the hopes of making 750K new connections over the next 12 months. Parsons The New School for Design recently tweeted, unasked, that its students should post their work to the site. The company has since started collaborating with design schools whose faculty and students want to develop their concepts into professionally-crafted products. School of Visual Arts, California College of the Arts, and Rhode Island School of Design are among its current partners.

“When I went to design school [for industrial design at Pratt, now a partner] I left being employable by others but not myself,” Burnett said. “We want to help students launch their own ideas.”