Appsecute launched last year with a platform that gave customers a single view across any platform as a service (PaaS). Today the company is showing a change in focus with an activity stream style service for DevOps professionals to see across the multiple services that are used for application management.

Co-founder Mark Cox said customers asked to integrate with more systems. He said they also realized they were building new systems on an almost daily basis to integrate with different services. That combination of factors led to its new platform now with different services monitored using what Cox calls a Facebook-style social timeline. Appsecute is initially providing connectors for GitHub, Zendesk, Tender Support, CircleCI, AppFog, CloudFoundry.com and Heroku with more to follow over the next few weeks. Developers can build their own connectors using Appsecute’s connector API. 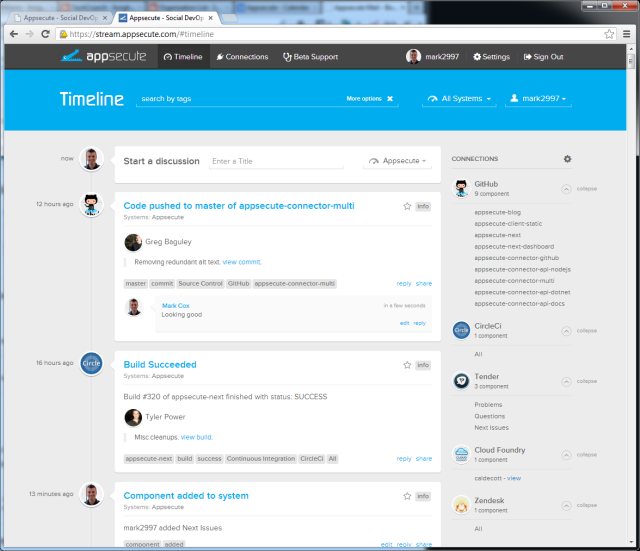 Cox says it is a specialized platform that is configured according to the systems and software used for people with developer and operations responsibilities. Cox says its activity stream gives a status update of software a developer is coding or deploying.

The change will also help decrease the tension with other PaaS providers. That makes sense. Appsecute did aggregate the different PaaS offerings and I can see how that might be a point of contention. With a more specific focus, Appsecute provides a platform that acts as a routing mechanism for knowing the behavior of the app in question. It competes most with a company like Atlassian. I would not be surprised to see other PaaS providers offer something similar.

Most interesting, to me at least, is how Appsecute will open-source its connectors. The first person to use the new service asked if he could build his own, which made the team realize it would be something worthy to open up.

In all, I like the Appsecute turn in focus but I can’t help think that the service can be easily copied. That is except for the open-sourcing aspect of what Appsecute seeks to do. Building out connectors is a smart move, reminding me of IFTTT or even a front-end automated recipe index of different configurations that show the health of the app in deployment and on the infrastructure.