Quixey, the app-search startup that signed a deal to power app-search results on Ask.com this December, is today announcing another high-profile partnership, this time with U.S. mobile carrier Sprint. The operator will use Quixey’s technology in Sprint Zone, its branded app and media store, and Sprint Digital Lounge, a portal for finding similar content — including ringtones, TV and radio shows, music and now apps — via the web. 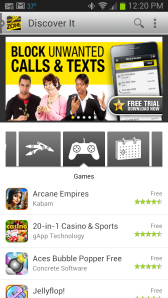 The Sprint Zone integration, which is being pushed out in a staged rollout to select Android devices, will reach 1 million consumers initially. It will also be integrated on the new Android Sprint smartphones that launch this year. Meanwhile, Quixey’s integration in the Digital Lounge has been slowly going live over the past couple of days. Both have been a long time coming – partnerships with carriers can take many months, even up to a year, to complete from talks to launch dates.

For Sprint, and other mobile operators – Quixey says that it has two more integrations planned with at least one other U.S. carrier – the move to bring better app search capabilities back into their own self-branded app and content stores are the operators’ ways of fighting back at the massive shift in the industry that came from the debuts of consumer-facing stores. This shift was led by Apple’s iOS App Store and its iTunes Store app, but was soon followed by Google Play and now Amazon’s Appstore.

In an attempt to get their own brand back in front of customers’ eyeballs, carriers are today putting everything under one roof, including not just apps, but also TV or video, ringtones, music, and even customer account information. For Sprint, its online portal in particular was critically missing the app component entirely, while on mobile, Quixey will take over the app recommendations function through the addition of a new “Discover It” tab, plus add Quixey-powered search capabilities. 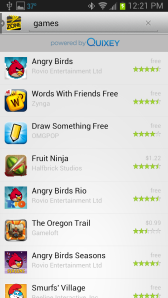 This isn’t Quixey’s first integration on a U.S. mobile operator’s devices, but it is the first that involves powering an app and/or media store. Previously, the company’s partnership with Skyfire, a browser toolbar maker, has seen the app search functionality embedded into the default browser on select AT&T devices. In the toolbar, there’s a button that reads “app,” which when pushed, will point users to apps related to the websites they’re viewing. (For example, ESPN.com readers might be recommended the ESPN app). Although only a couple of months old, the app button is the second most popular on the toolbar, after Facebook.

Quixey also has relationships with Singapore’s StarHub and Vodafone, but on the latter, it’s not permitted to disclose the specific product integrations.

Many people aren’t familiar with the brand “Quixey” because, unlike Apple-acquired app search service Chomp, Quixey doesn’t offer any sort of consumer-facing service. Its recently redesigned website now offers a search engine-like interface with filters below the main search box, but the company tells us that this is primarily used as a sales tool for partners. It’s not being marketed directly to consumers.

Though the majority of the over 1 million cross-platform apps in its index have a mobile component, Quixey is becoming more than a mobile app database – it wants to search, index and rank apps on any platform whether, including desktop, browser (add-ons), web, mobile or tablet — and maybe soon cars. Current partners (which Quixey can disclose) include Skyfire, Vodafone, StarHub, Maxthon, Stream Media, Mark/Space, and, as noted above, Ask.com.

Quixey’s engine is different than many app-search providers in that it doesn’t just index the app’s title, metadata and description – all things provided by a developer – but instead also takes in “signals” related to the app, including app reviews, blog posts, articles, online chatter like tweets, and more. The signals help Quixey better rank apps, and understand what people think of an app, how they use it and what it is capable of doing.

The Sprint updates are rolling out now.

Quixey is backed by $24.2 million in funding from U.S. Venture Partners, WI Harper Group, Innovation Endeavors, Translink Capital, and others.