While education startups like Khan Academy and Coursera are democratizing access to primary and secondary-level instruction, there are plenty of other hobbies where face-to-face teaching could be disrupted (or enhanced) by software.

Music could be one of them — at least at the beginner level. Playground Sessions, a New York-based startup that spun out of a ventures division of creative advertising agency BBH, is launching a new way to teach piano today. It uses a MIDI keyboard, video demonstrations, and software that provides instant feedback on how well you’ve matched every note. This is desktop software that you have to download from Playground Sessions’ website, but a proper tablet app is on its way.

I’ve spent more than 20 years playing piano and competing, but I had to learn from a very hardcore Russian piano teacher (who I’m immensely grateful for).

While it would be hard to get to play Chopin’s Revolutionary etude all on your own, Playground Sessions could reach a more beginner-level player who isn’t quite ready to fork over more than $40 or 60 an hour to an individual teacher or who wants to play pop songs, not Bach partitas.

It works, as you might guess, through several ‘Bootcamp’ tutorials on basic musical concepts like chord progressions, notation and key signatures. These are designed by a New York University music instructor Alex Ness.

Then there’s interactive sheet music and complementary video lessons on how to play specific songs like Katy Perry’s “Firework,” or David Guetta’s “Without You.” The pieces are sold in an iTunes-like store for about $5.99 a pop.

“One of the reasons students drop out early is that they don’t really love the sound. They’re not motivated or engaged by the songs they’re playing,” said Chris Vance, who co-founded the company. “One of the things we wanted to address was giving people more choice and ownership over what they play.” 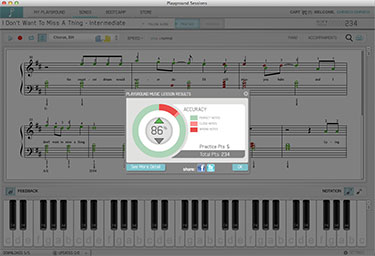 When a student picks up one of these songs, they can play into a MIDI keyboard and get feedback on how well they’ve picked up a song based on how many notes they’ve played correctly. Playground Sessions also shows them how much they’ve improved compared to the last time they played and where they’re seeing problem areas.

Playground Sessions’ membership will go for $9.99 a month with an annual plan or $14.99 per month with a quarterly plan.

Vance signed on Quincy Jones, the famed record producer who worked with Michael Jackson and Frank Sinatra, along with David Sides, a YouTube star known for his renditions of pop songs, to advise on product direction.

Along with BBH’s invention division ZAG, Vance and other unannounced angels are owners of the company. ZAG put in at least $1 million, Vance said, and then other angels followed on in a September seed round.

Playground Sessions faces several competitors, but the market is quite young. There are tablet-based competitors like including JoyTunes, which doesn’t require a MIDI keyboard and seems to be more geared for children. Then for the guitar, there is TechCrunch Disrupt finalist Incident, which makes the iPhone powered electric gTar, and Ovelin, which makes the guitar teaching app WildChords.