HTC has been struggling to get an edge against market leader Samsung when it comes to getting critical mass in Android smartphones, so during today’s launch of HTC’s newest HTC One flagship phone, the company took another route beyond hardware to promote itself, with introduction of Blink Feed, a new service that aggregates content into a single activity feed that appears on your homescreen as part of the updated HTC Sense UI.

The idea is to position HTC as a leader in offering new services rather than simply just new devices. “HTC has always been about innovation,” Peter Chou said as he took to the stage today during HTC’s London presentation.

In what I would describe as a subdued performance from an executive that I have normally thought of as animated and enthusiastic (the subdued face exemplified in this picture here, which I took after the presentation so that I could get him up close), Chou laid out his position on content. He said he believes that focusing on services “goes to the heart of how people really use their phones.” 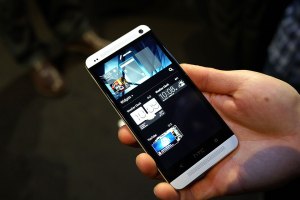 are using them,” he told the audience in London. Whether this is more fact or HTC’s hope for this phone is still up in the air, but he pulled out one stat that bolstered the former of the two. He says that last year, some 1 trillion pieces of content were generated on mobile devices globally.

To further hammer his point home, Chou brought on to the stage a surprise guest: Tim Armstrong, the CEO of AOL (owner of TechCrunch) to talk up Blink Feed. HTC has signed up some 1,400 content sources to pull in updates into Blink Feed, including a number of properties from AOL (including us).

The move comes after AOL itself has pulled back from a lot of its own mobile efforts, which had included standalone mobile apps independent of any online AOL properties. “On the smartphone it takes a lot to get content right,” admitted Armstrong today. AOL itself has instead distributed out its mobile specialists out to different properties — and is also, it seems, forging partnerships with others, like HTC, to find a bigger audience for its mobile efforts.

It looks like it might also be the start of more collaboration between AOL and HTC. “We are happy to work with HTC and innovate with them in future,” said Armstrong.