Findables, a specialty case maker for smartphones and tablets, has just scored some significant distribution deals for its QR-coded, “connected” cases. Previously, the company was selling online and in 550 “The Source” locations in Canada, but will now be on the shelves in all 1,100 Office Depot stores in the U.S. next month, as well as made available on BestBuy.com, Amazon, and Gamestop.com.

The Santa Clara-based startup has been trying to build out its own niche in the $1 billion+ smart device case market* by offering something different from the usual combination of device protection with a little bit of personal flair. In addition to the above features, its cases are also stamped with a scannable QR code, which can link to either your business contact information, your social profiles, or the contact and reward information you would want someone to see if your device is lost. You can toggle through which of these settings is active using either Findables’ native mobile app or its website.

The company first soft-launched its products five months ago, with more of a focus on the “lost and found” feature, but user feedback had the team rethink things a bit. Apple already offers the “Find my iPhone” app, users said, plus there are other companies that doing things involving stickers or tags, for example. Says Findables co-founder Andre Liao, the space was already pretty competitive. 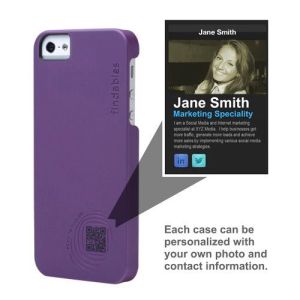 So with the new line of cases, the emphasis will be more on the social features, something which speaks to the team’s original inspiration for Findables, anyway. “[We wanted] a case that had some personality. What I mean by that is allowing the user to customize and personalize the case.” says Liao. “Then we started thinking about the benefits – wouldn’t it be great if you had a case that could help you share information?”

Via the Findables site or app, users can customize their profiles with any info they choose by uploading pictures, writing a short bio, and adding links to social networking services like LinkedIn, Facebook, or Twitter, for example. Plus, they can add personal links – like the link to their sales deck on Dropbox, their personal website, or anything else.

Upon sign-up, the code on the case is registered to the user, and from then on it will show whichever profile (business, personal, or “lost”), you have enabled.

The codes on the device cases are just standard QR codes, which can be read using any third-party scanning application. If using the Findables-branded iOS or forthcoming Android app, however, you can download the digital business card directly into the phone’s address book. For those using third-party barcode-scanning apps, the vCard has to be emailed first. The native apps also track the history of scans, and support favoriting.

Although you could argue that QR codes haven’t exactly taken off in terms of being marketing vehicles, at least consumer awareness about these codes is there now.

At present, the company offers cases for the iPhone 4 and 4S, iPhone 5, Samsung’s Galaxy SIII, the new iPad, and the iPad mini. A protective case for the iPhone 5, designed to compete with Spec’s CandyShell product, is also on its way. Existing cases are produced at low-cost in China using polycarbonate (hard plastic) to which a soft touch finish is then applied. They retail for $29.95-$49.95 and Findables has sold over 20,000 to date.

Findables, co-founded by Derick Yee and now a team of eight, has raised angel funding in the “hundreds of thousands,” and was intending to raise a round a few months back. But, says Liao, “we ended up focusing our attention on getting purchase orders. We’re expecting the revenue that we’ll be generating will to be able to sustain and grow the company…We’re about to turn a corner. We’re about to be profitable,” he claims.

Of course, that’s all a big bet on the QR code’s traction and growth. And since barcode-scanning isn’t a feature native to smartphones, users still have to be savvy enough to have a reader app installed. Relying on savvy users means this is still a risky bet. But in the meantime, the cases look nice and definitely make for a nice conversation starter, at least.

Correction: Findables were in Canada’s “The Source,” not its “The Store” outlets. The article has been updated to reflect.