Six months after its initial launch, the preview of Outlook.com, Microsoft’s free webmail service that is meant to replace the aging Hotmail brand and design, now has over 60 million active users according to the company’s own data. Today, Microsoft is officially taking Outlook.com out of preview and will start prompting its 360 million Hotmail users to switch to the new service (while keeping their old email addresses). Microsoft expects to switch all Hotmail users to the new interface and platform by the summer.

Now that Outlook.com is out of preview, Microsoft is also launching a massive new marketing campaign for the service in the U.S., and the company tells me this will be the “largest ever” for a free webmail service. This campaign, which will include TV ads and a number of digital-only videos, will have a very upbeat tone and will not be based on the recent Scroogled campaign. Instead, the new ads focus on Outlook.com’s features and how it plays well with the rest of Microsoft’s suite of online tools, including, for example, SkyDrive.

As Microsoft’s senior director of product management, Dharmesh Mehta told me earlier this week, his team spent the last six months working on scaling the service and preparing it for this transition. Similar to what Microsoft is doing with its migration from Windows Live Messenger to Skype, the transition will be optional at first and become mandatory later on. Unlike the Messenger/Skype switch, Microsoft isn’t staggering the upgrade by geographic location, though. Hotmail users can switch at any time over the next few months. At some point in the future, this switch will become mandatory, but the timing for this remains up in the air.

Microsoft, it is worth noting, always gave Hotmail users the option to move to the new Outlook.com, but it will now actively prompt users to do so and also email them to remind them that they can switch.

Mehta acknowledged that email is “historically a very slow-moving category.” People don’t generally switch between email services very often and are even less likely to abandon their addresses in favor of a new service. Outlook.com, he stressed, lets you keep your Gmail address if you want to switch (over one-third of Outlook.com’s 60 million active users, Microsoft says, switched from Gmail) and current Hotmail users will obviously be able to keep their old @hotmail.com, @msn.com and @live.com addresses.

According to Mehta, Microsoft believes that it now has a very competitive webmail client with features that are on par with Gmail, the service that stole Hotmail’s crown as the most popular free email service. Now that Gmail is becoming more and more complicated, he told me, is a “good opportunity to push people out of their complacency” and get them to try something new.

Microsoft is clearly not shying away from the Gmail comparison. In its press materials for today’s announcement, for example, the company argues that it’s been nine years since Gmail disrupted the email space “and did something basic and offered 1 GB mailboxes. “Things are different today than they were in 2004,” Microsoft writes. “We use new communication services, like Facebook, Twitter, and LinkedIn and we have a much greater appreciation for well-designed and well-connected systems.”

Hotmail was obviously a pioneer in the webmail businesses, but over time, @hotmail.com addresses lost their luster as it was eclipsed by its competitors like Gmail. Outlook.com, on the other hand, is a very modern webmail client with numerous smart features like sweep (to quickly clean up your inbox) and active views (to track packages, etc.). Some Hotmail users will obviously dislike the change to the modern, flat interface. Overall, however, this is clearly a major upgrade to Hotmail and may just allow Microsoft to once again compete in this space. 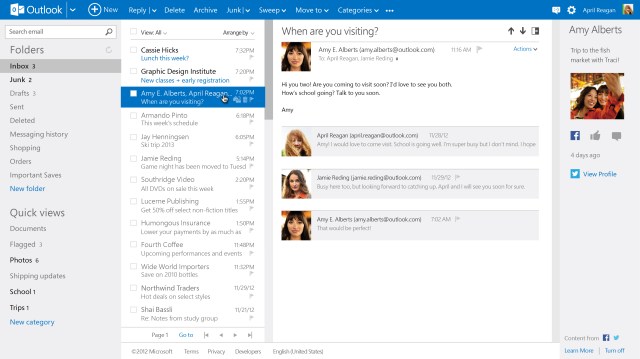 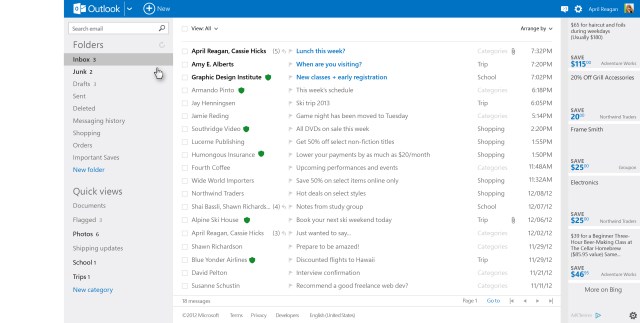