2600hz is part of a new movement to turn the data center into the new telco. That’s one way to put it. Another is to realize that our 100-year old phone system is decomposing. And companies like 2600 are providing feature-rich capabilities that make mainstream mechanical offerings seem as antiquated as picking up your mobile and expecting to hear a dial tone.

The company develops open-source software for developers to create services such as their own phone services or web apps. Its technology is one of the first that can be virtualized, meaning it can run any kind of infrastructure.

The 2600hz team says what they provide fits right in the middle between the high-cost, proprietary IP hardware and combined hardware/software technologies and first-generation open-source technologies. Companies like BroadSoft offer often expensive, integrated proprietary, hardware/software technologies.  Asterisk, an open-source software, is at the other end of the spectrum. It is capable of providing users with a private branch exchange (PBX) so customers can set up their own voice service. It is used primarily for smaller installations but is often criticized for having scaling issues.

The 2600 Kazoo platform is based on a set of open APIs that a customer can use to offer simple services, such as voice, or to provide more sophisticated routing capabilities. It can scale up to tens of thousands of users. 2600 primarily serves the reseller market, those companies that can offer SMS services, for instance, on a telco’s network. 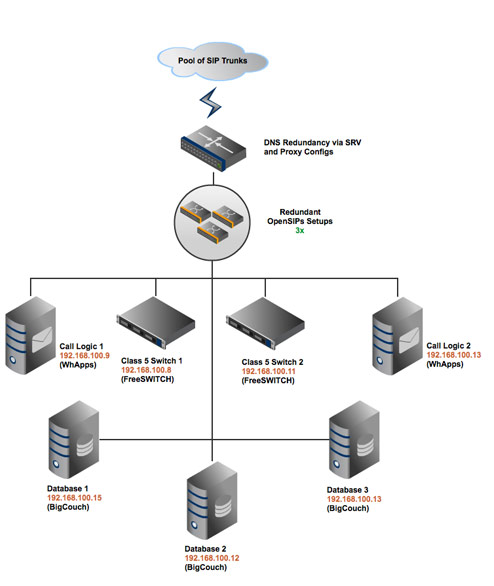 The 2600 software runs in a data center, providing far more than what a telephone switch is designed to do. A telephone switch, in comparison, is part of an exchange, used for relaying calls from the “central office,” usually stout brick, faceless buildings that house the hardware to move voice calls across its networks. It’s a 19th-century system with a business model just as old. Make a call and the telco charges you by the minute. But with data as the core, the model is changing to one not as much measured by minutes used but usage of the data itself. With 2600, the software can run in any data center and so the customer can choose their own telco network. A company developing a private video network using 2600 software may use an AT&T network in the United States and Vodafone in Germany.

It is that vast network that still makes the telcos viable and why 2600 coexists with them. Those developers feed the network, making it all a virtuous circle.

Cool stuff but the threat comes from companies like BroadSoft, which offers a level of service that may be costly but also meets the needs of a customer base less interested in building its own platform.

But what about the name? Hackers will recognize 2600hz as the frequency that could be hacked to access the telco networks and make free calls. Steve Wozniak and Steve Jobs are perhaps the most famous of these pranksters. Wozniak on one occasion called Vatican City and imitated Henry Kissinger. The pope apparently was napping and  could not take the call.

As more people use the Internet for voice so is the cost also decreasing. It’s getting to the point where the call is practically free, harking back to  those defining times of our hacker culture.