[Editor’s Note: This is a weekly series. If your company is doing something amazing to help a charitable cause or doing some good in your community, please reach out.]

One of the amazing things about technology is that it opens the doors to things for less fortunate folks that many of us take for granted. Being able to sit down and read a good book is something that we do on a daily basis, but never think about all of the people out there who don’t have that luxury. With sites like Amazon, we have a seemingly infinite number of choices on what we’d like to read, but a child in Africa may never have that luxury. 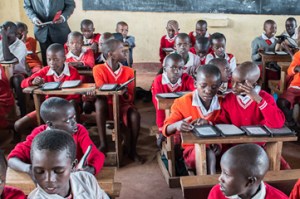 A non-profit founded by ex-Microsoft and Amazon employees called Worldreader is trying to extend this luxury to every child in the world. It’s a lofty goal, and that’s what social good is all about. Its CEO and co-founder, David Risher, was a Senior Vice President for Retail and Marketing for Amazon. He says that he is a “lifelong reader” and that books can change lives. Instead of just thinking this way on his own, he started Worldreader to put his thoughts into action:

Growing up, books were my way to explore the world. We can make it possible for children everywhere to do the same.

Worldreader has come a long way since we first wrote about them in 2010, as its vision is now being fully realized.

While we have books all over the house, in the basement, iPads stocked with titles on the coffee table, kids in third-world countries don’t even have access to a newspaper, let alone a classic literary work, which is really sad. Worldreader has gotten support from former Microsoft CEO Bill Gates, so it’s safe to say that Risher is on to something with this venture.

The organization has created a platform for e-books that can be put onto feature phones and other inexpensive devices. Feature phones are widely available in developing countries, as things like texting are huge in places like Africa. As of last month, it has put 428,000 e-books onto these devices for over 3,000 children in sub-Saharan Africa. The organization believes that by helping kids read more and giving them the ability to make decisions on what they read, when they want, it will help their entire families and communities. The more you read, the more you know and the more empowered you are.

Books like Pride and Prejudice and A Tale Of Two Cities are at the fingertips of thousands of kids who would have never had the opportunity to read them before, and Worldreader wants that to grow quickly. Along with books, the organization has put educational information about HIV/AIDS and malaria, instantly turning the device into a life-saver as well as a learning tool.

Check out one of these devices below with the Worldreader Mobile platform on it:

Worldreader was nominated for a Chase American Giving award, but didn’t win the million dollar prize ultimately. What they did get was support and awareness for what they’re doing, which pretty much makes up for the million that it missed out on.

You can donate to Worldreader on behalf of someone that you care about, knowing that an e-book reader will make its way into the hands of a very lucky child. There’s not much better than that. Wordlreader’s ultimate goal is to send one million e-books to Africa and is well on its way to doing so. As far as results, it says that kids who have received the readers spend up to 50% more time reading, with some of them having read 90 books in a single year.