Google’s Android platform dominates the U.K.’s smartphone landscape, powering 54 percent of the handsets in use at the end of 2012 (Kantar’s data). But what apps are U.K. Android owners spending increasing amounts of time on? Researcher Nielsen has come up with a method of measuring the fastest-growing Android apps and has just crunched the data on app usage during May to October 2012 — which it says flags up growth in mobile shopping and commerce.

The rise of mobile shopping in the U.K. was also flagged up last December in research put out by the U.K.’s telecoms regulator. Ofcom’s data suggested the U.K. leads several international markets when it comes to technology adoption and usage, indicating the market is something of a bellwether. There are also plenty of signs that mobile shopping is growing in the U.S. (Data put out by Flurry last month found time spent in retailers’ mobile apps grew more than 5x between 2011 and 2012.)

Nielsen’s new U.K. Android app usage study is based on devices used by a monthly average of 1,500+ adults who have opted to install a meter on their smartphone. The meter measures the total time an app is visible on users’ screens (the screen has to be on and the app has to be in focus, with background activity “deliberately removed,” for usage to be measured). The study excludes system apps, such as camera and native email. Nielsen’s criteria for applications to be included is a minimum reach of 4 percent and a “minimum time-spent growth” of 30 percent as of October.

Nielsen has also ranked the most popular U.K. Android apps, which features the usual suspects of Google Play, Google Search and Facebook in the top three slots (for the full top 10 of most popular apps see the bottom of this post). But its meter measure system also allows it to take the temperature of what’s blowing up in popularity. Nielsen’s take on the fasting-growing Android app data is that U.K. consumers are becoming more sophisticated in how they use their smartphones — looking for apps to help with “real world tasks” not just “fun gimmicks and games,” as its managing director for digital in Europe, David Gosen, puts it on the company’s blog.

According to Nielsen, seven of the top 15 fastest-growing “major” Android apps for usage over the May to October 2012 period were ‘commerce apps’ — by which it means apps that let users “buy digital products, general retail products, and experiences through social commerce.”  Of the other eight, two were also banking apps. 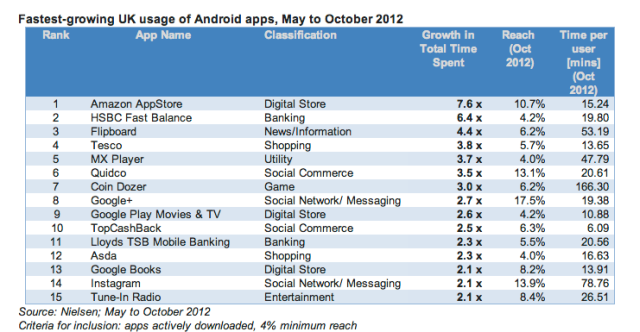 Worryingly for Google, time spent on Amazon’s rival Android AppStore, the fastest growing major app in Nielsen’s list, increased 7.6x over the metered period, with the quantity of time per user spent on the app now up to 15.24 minutes per month. As you’d expect Google’s Play store remains the most popular U.K. Android app, reaching 95.5 percent of users vs. 10.7 percent reach for Amazon’s AppStore, but considering users have to go out of their way to install Amazon’s store (which is not on Google Play), its reach is significant.

Second in the fast growing list was HSBC’s banking app, which saw usage grow 6.4x over the metered period and users spend 19.80 minutes per month using it to check whether they are overdrawn or not. Third fastest was social magazine app Flipboard, which saw usage increasing 4.4 x and users spending an impressive 53.19 minutes per month using their phone to read stuff their friends have liked.

Returning to the mobile shopping theme, Nielsen said its data shows retail apps are experiencing increasing reach and engagement. It noted that supermarket apps for Tesco and Asda are the fastest-growing in their sector in the study. Tesco’s app reached 145 per cent more users and those users spent 45 per cent more time engaging with it between May and October 2012, according to Nielsen. Two cash-back service apps also made the list: Quidco and TopCashBack, growing 3.5x and 2.5x respectively.

Other fast-growing, non-commerce Android apps include: MX Player (video player), Coin Dozer (a game), and the Google+ social network — which Google has been integrating heavily with its other services in order to try to drive usage. If Nielsen’s data is anything to go by Google’s press-gang tactic appears to be yielding some results, with usage of the Google+ app up 2.7 x and time spent per user standing at 19.38 minutes per month (still light years behind Facebook mobile usage levels, of course). Google+’s U.K. reach was 17.5 per cent vs 71.9 per cent reach for Facebook, according to Nielsen’s data.

Facebook-owned photo-sharing app Instagram, which only landed on Android in April last year, also made the fast-growing list — increasing by 2.1 x over the metered period, and achieving a reach of 13.9 per cent. Instagram users spent a very impressive average of 78.76 minutes per month using the app to look at their buddies photos and presumably also create and upload their own.

Turning to the U.K.’s top 10 most-popular Android apps by reach, the list is, as you’d expect, dominated by Google services which come bundled with (most) Android handsets sold in the U.K. — namely Google Play, Search, Maps, Calendar, Gmail and YouTube.

In the third-party/non-native app category Facebook takes the prize, grabbing third place in the popularity stakes, while eBay Mobile (more mobile shopping!) is in ninth place, and the WhatsApp Messenger app takes 10th place. WhatsApp’s reach is around a third (32.9 per cent) of the U.K. Android users, according to Nielsen’s data.