Series A crunch? Who cares with seed rounds like this? Today, Y Combinator-backed Virool, a self-service social video advertising platform, is announcing its monster “seed” round of $6.62 million. And Virool even got to pick from their choice of investors, institutional and otherwise, according to co-founder and CEO Alex Debelov.

No single VC led the funding, but the line-up of who invested is a fairly large list. On the VC side, there’s Thomvest Ventures, Menlo Ventures, Draper Fisher Jurveston, 500 Startups, Phenomen Ventures, TMT Investments, DominateFund (err, #DominateFund?), and FundersClub.

It seems, that just like Virool’s product does for its customers’ videos, the startup’s seed round went viral, too. 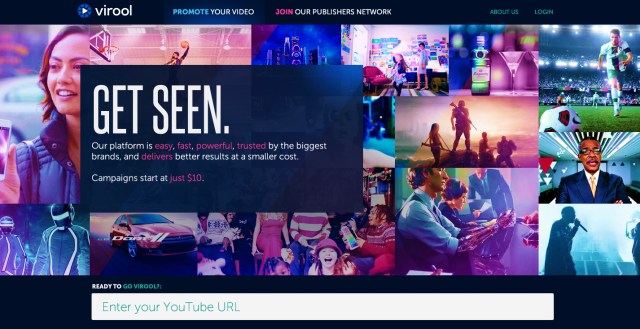 Before founding Virool in late 2011, Debelov’s first startup helped brands run video contests. One of the questions he kept fielding from clients at the time was “can you help me make these videos go viral?”

“Our answer at the time was always no, no, but it would be really cool if a service like this existed,” Debelov tells us. After meeting co-founder Vlad Gurgov, who was also working on a startup in the video space, the two decided to come together to build what has now become Virool.

The company participated in the Summer 2012 program at Y Combinator, and dutifully took partner Garry Tan’s advice about staying heads down on product until Demo Day.  “We locked ourselves in our apartment, we ordered groceries using Instacart, we used Exec to do chores and errands,” Debelov says with a laugh, giving shout-outs to other startups. “It was an interesting experience being utterly focused on just building the company.”

The end result was Virool, which allows anyone to promote a video hosted on YouTube, by targeting it across the startup’s network. That network today reaches close to 22 million people, across websites, blogs, Facebook games, and mobile applications. Since the launch of the self-serve platform in March, it has grown from 200 to 30,000 registered advertisers and has promoted 20,442 videos to date. 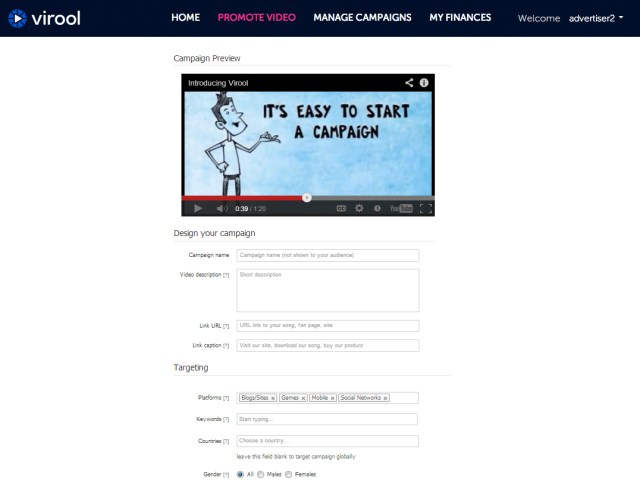 To get started, video producers, artists, studios, agencies or individual promoters, come to the Virool platform, enter in the information about their target audience like country, age, gender, interests, and platform preferences. They then put in their maximum pay per view and budget. After clicking save and depositing money, the video starts to make its way across Virool’s network on web and mobile. Promoters can see data about how many people are viewing the video, where those views are occurring, and where viewers are located. 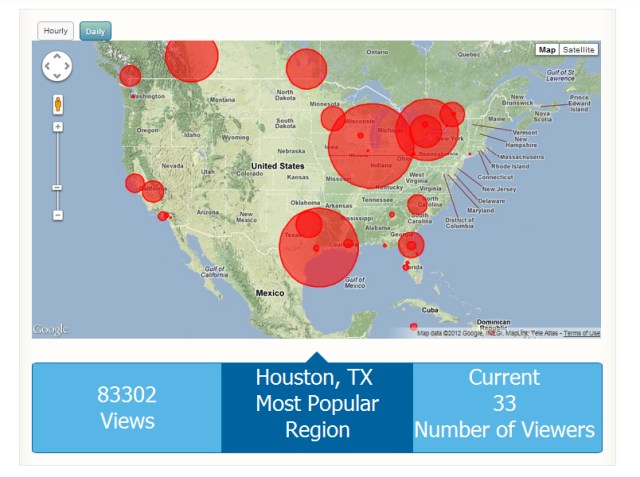 Several well-known brands have already used the platform, including Samsung, VW, K-Swiss, Sony and Orbitz. Intel was a particularly big spender, having run a $300,000 campaign using Virool in December. Another unnamed New York agency grew to the same point that month, after starting to test the platform with smaller amounts during the summer and fall.

But you don’t have to have thousands of dollars to spend to use Virool, Debelov explains. “Our goal is to keep the platform very simple. To this day, the cheapest campaign you can start on Virool is $10 – primarily because we’re big believers in making this type of service accessible to everyone,” he says.

Currently, music videos are largest category by number of videos promoted, but brand sponsored videos are the biggest spenders. Movie trailers and videos of mobile apps and games also make a prominent showing among Virool’s 30,000 registered advertisers. Debelov notes that number is now growing at a rate of 450 new sign-ups per day, and the site is seeing around 80 to 90 campaigns run daily, as well.

Can Viral Videos Be Bought?

But the biggest question is, can this method work? Can Virool actually make a video go viral?

“The reality is no,” says Debelov. “People will find content they find interesting and relevant to them.” He equates what Virool is doing as something that’s similar to how late night TV host Jimmy Kimmel helped the now-infamous “Double Rainbow” go viral.

“All he had done was expose this video to a couple hundred million people who would find this video interesting to them,” Debelov says. (Actually, he tweeted it to his 90,000 Twitter followers). “We’ve taken that process, and reversed engineered it. We can’t guarantee your video will go viral because it all depends on your content, but we can get it in front of a million, two million, half a million, whatever your budget is – we can get you in front of that audience.”

The company says that its $6.62 million round is a “record” for YC companies. That’s difficult to gauge because everyone defines a seed round differently. But we’ve confirmed that they did raise the most money out of all the companies in the Winter and Summer 2012 cycles at YC.

“The future of online advertising is real-time and programmatic bidding,” says Don Butler, Managing Director of Thomvest Ventures, explaining his firm’s investment. “Virool is in prime position to capitalize on this trend with their self-service video advertising platform.”

With the additional funding, Virool will be able to staff up its team, particularly on the sales side so that there’s someone actually able to get on the phone with customers spending thousands of dollars on the platform and build relationships. The startup’s bigger goal, however, is to scale the service worldwide.

TechCrunch readers can use coupon code “valentines2013” to get $50 worth of Virool credits at checkout. This is available only to the first 1,000 people.

Note: Virool originally said DST invested. It was Yuri Milner we were told following publication. The post has been updated to reflect.