Bump, the flagship contacts, photos and file sharing application from the company by the same name, is today getting an upgrade on both iOS and Android in order to support file-sharing to and from your computer. The ability to “bump” your phone with your computer was first introduced in May 2012, but at the time it only supported photos. With the new release, users will be able to share any file from their phone to computer, and vice versa.

Bump Technologies co-founder and CEO David Lieb describes the added functionality, saying, “we’ve kind of turned Bump into an unlimited and ubiquitous USB drive. So you can throw your USB drive away, as long as you have a phone with Bump on it.” 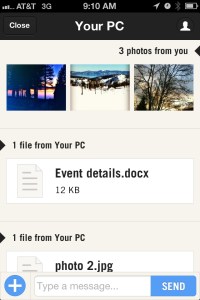 For those of us who are earlier adopters of new technology, the USB analogy may seem a bit “old school” – after all, many of us have long since moved on to cloud services. But it speaks to the kind of users the company is targeting with its technologies.

“What we try to do is build products that ‘normal’ people can really engage with,” Lieb explains. “So yeah, you can do all these things if you’re set up on some cloud-syncing solution, but what we find is that normal people don’t really know how to set all that stuff up…we want to build stuff that has low cognitive overhead,” he adds.

In terms of the new file-sharing capabilities, Lieb predicts some fairly “normal” use cases, like backing up your phone’s contacts or saving videos from your phone to your computer, for example. These files are actually stored on Bump’s servers, though not publicly. Instead, users are given a URL if they want to share the files or photos with others. Most don’t do that, though – they simply click the save button to download the item they transferred to their computer.

Lieb says there’s no plan to turn Bump into a hosting service for files and photos, but it will continue to work with partners to integrate options for saving files to the wider web. Currently, Dropbox is the only one that has been integrated so far, but he says some users are now asking for Evernote, too.

Expanding upon Bump’s phone-to-web solution goes after another pain point the company has faced – the need to know other people with the Bump app installed in order to find a use case for the app. Originally, Bump offered a way for two people to share data between phones. With this Bump to computer feature, however, you can take advantage of the service all on your own.

While today, only around 5 to 10 percent of Bump’s users are “bumping” with their PC, that traffic is trending upwards, growing by 50 percent over the past couple of months. Bump to date has seen 125 million downloads, but it won’t reveal its current install base or active users. Lieb would say that a “large number” of those still have the app installed, and when the company pushes an update, over half of those users would relaunch Bump to see what’s new.

For what it’s worth, the app is still in good standing on the iOS App Store, where it’s currently ranked #24 in the “Social Networking” category. On Android, it’s #19. (source: Distimo).

The updated mobile app is available now for both iOS and Android, from the Bump homepage here.