Apple is a unique company in that even if you break down its individual lines of business and view them as distinct from the whole, it can still be regarded as immensely successful in a number of different areas. As a hardware company, it’s a success; as a software and services provider, it’s a success; and as a retail chain, it’s a success. And Apple’s physical retail presence shows such steady upwards growth that it, rather than any product, could be the site of the company’s greatest innovation over the next few years.

Speaking at a Goldman Sachs investor conference on Tuesday, Cook went into detail about Apple’s retail plans, addressing the growth and success of the company’s stores, as well as plans for expansion and changes to their deployment strategy for 2013. Asymco’s Horace Dediu visualized the numbers shared, charting the progress of key metrics like store openings, store visitors international distribution and more in a blog post yesterday.

One of the most important metrics Dediu tracked is depicted in the graph representing store visitors vs. stores open. After initially expanding their physical presence more quickly, and averaging fewer visitors, attendance quickly cut up and for the past two years, stores have been averaging around 1 million for every location open. Apple’s strategy this year involves not only opening new locations, but closing existing ones and replacing them with larger outlets, which should make for an even higher visitor-to-store ratio in the future if trends continue. 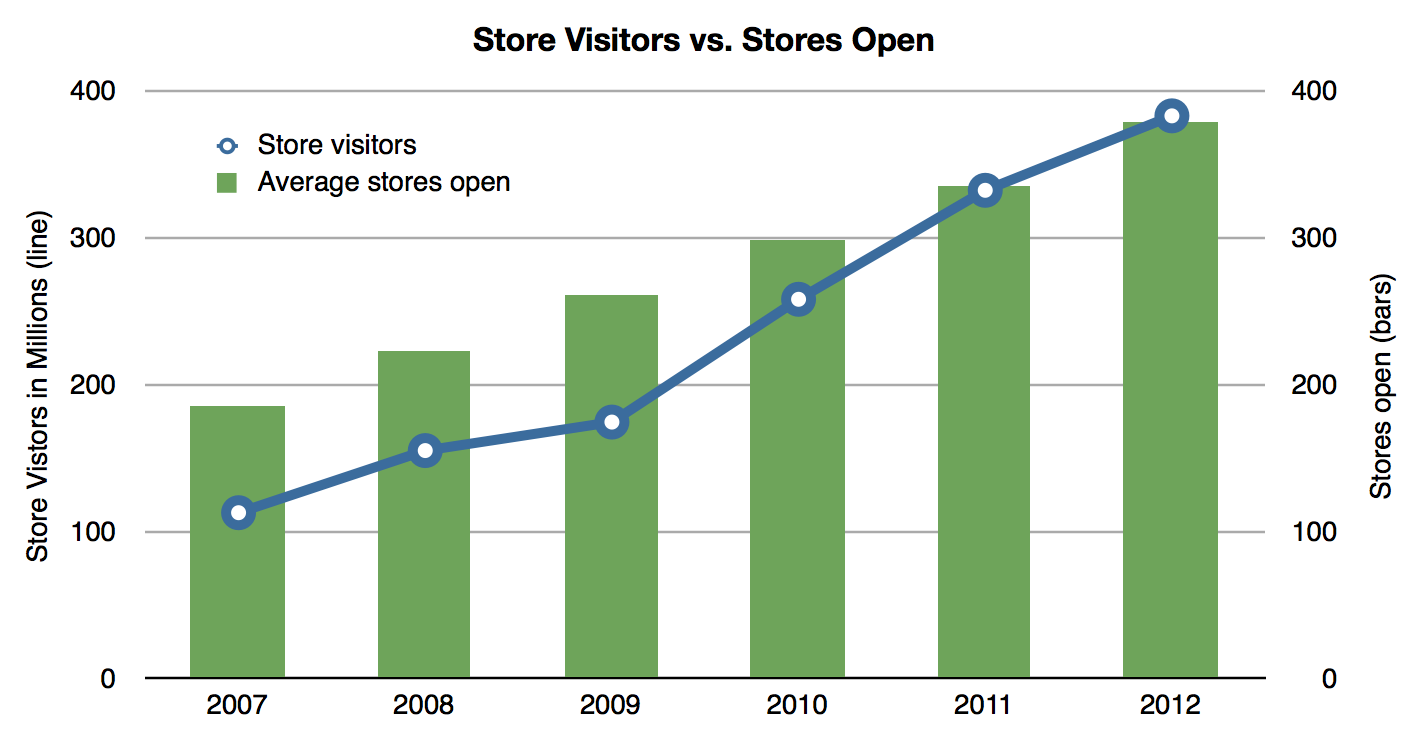 In terms of money invested in Apple’s retail efforts, we see a trend that could result in much more of the kind of innovation I alluded to earlier. The Asymco chart for spend on “Property, Plant and Equipment” shows a huge recent spike in money committed to “machinery, equipment, and internal use software,” as opposed to normal, steady growth for land, buildings and improvements to said facilities. 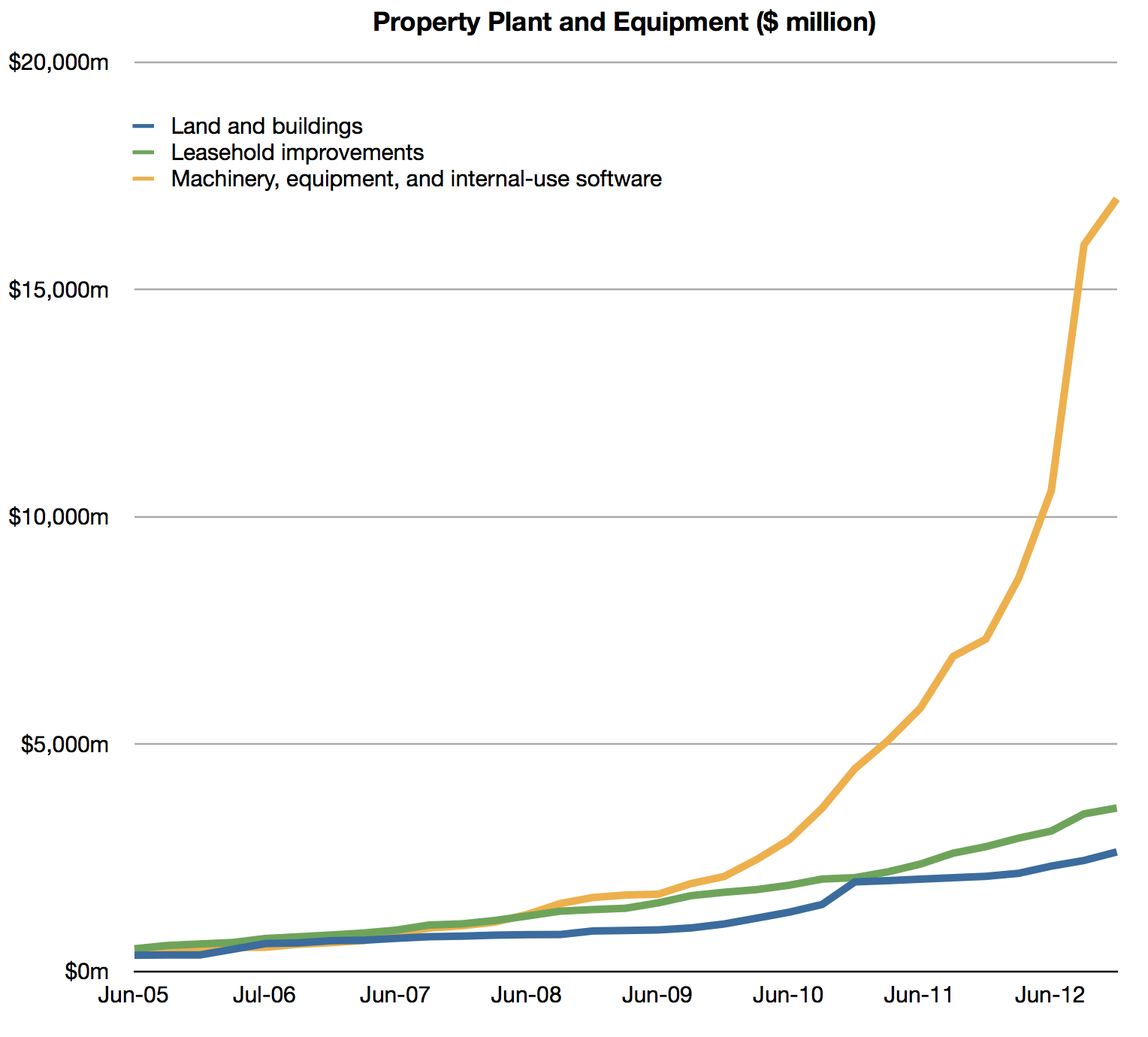 Since late 2009 when we begin to see the curve start to trend upwards more sharply, Apple has introduced its own iPod touch-based check out and inventory system (replacing a legacy version based on Windows CE hardware), moved to iPad-based information consoles, changed the structure of its stores to de-emphasize checkout and highlight Genius and One-to-One customer interaction, launched self-serve EasyPay shopping for customers, introduced in-store pickup, and just generally changed the way the world thinks about brick-and-mortar stores. No big deal.

Remember too that Apple’s retail leadership has been somewhat in turmoil recently. Apple’s SVP of Retail Operations Ron Johnson, largely credited with much of the retail division’s creation and success, left the company back in June of 2011. A search for his replacement ultimately resulted in the controversial hiring of Dixons CEO John Browett in January 2012, after a six-month search. Finally, John Browett was dismissed from that role in October 2012, after less than a year on the job. Apple is still looking for a replacement for Browett.

It may seem like lack of a clearly defined top man in retail would lead to uncertainty, but Apple Retail had its best year ever in 2012 amid all these shakeups, and CEO Tim Cook said that the retail locations in particular have helped the iPad enjoy its runaway success since launching in 2010.

Cook talked about the label of “retail” not being sufficient to describe what Apple is building with its stores, and more and more, that’s becoming true. Just like the company tries to hide elements like the file system in iOS, or deliver CE devices that aren’t upgradeable or modular, opting instead for a smooth, appealing and user-friendly outward appearance, it’s also taking commerce out of the store experience as much as possible. And yet as a reward it’s winning more customer dollars.

You can measure innovation in terms of a revolutionary new smartphone, or a dramatically different PC design, or you can measure it in the aggregate effect of a sustained effort to change an age-old practice. Apple’s retail efforts are the latter kind, and its spending patterns suggest there’s plenty more of that to come.