After operating for about 18 months in San Francisco, urban-delivery startup Postmates is finally ready to expand into its second market. The company recently opened up deliveries in Seattle, allowing residents there to get food, groceries and other products delivered from restaurants and other shops throughout the city in less than an hour.

To prepare for launch, Postmates has been quietly ramping up its Seattle presence, sending a two-person team to hire part-time delivery people and interview for a couple of full-time employees to manage operations in the new locale. That includes a general manager to manage partnerships and local inventory, as well as an operations manager to hire Postmates and handle local deliveries. The company will also probably hire a community manager once operations take off in earnest. 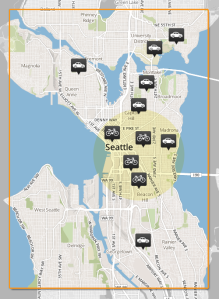 Today, it has about 35 Postmates making deliveries throughout the region while it’s beta testing — that’s compared to about 200 that work for the startup in San Francisco. But it plans to expand that quickly as it transitions to a full-fledged on-demand delivery service. Most of its focus will be on the downtown area, but it will take deliveries throughout the Seattle area marked on the accompanying map. While final pricing hasn’t been set, Postmates co-founder Bastian Lehmann said pricing for deliveries in Seattle will be slightly lower than in San Francisco, probably about $1-$2 less.

The new market is set to prove the model for the company’s urban-delivery app, Lehmann told us. After launching Get It Now in San Francisco last May, the company has dramatically increased the number of deliveries that are made there. It’s delivered more than 130,000 items since launch and is making thousands of deliveries each week, according to Lehmann.

The company has also improved the experience in San Francisco, reducing the average delivery time to 39 minutes, from 42 minutes a few months ago. Keeping delivery times low is important to retaining its customer base and winning over new users. While the company promises deliveries in under an hour, Lehmann said it aims to have items delivered in 20 to 25 minutes.

Also key to having a quality experience is managing the inventory of items that its users can order from restaurants and other shops. In San Francisco, it has menu items pre-entered to choose from at more than 4,000 different locations throughout the city. That allows its customers to quickly choose from a list of items that they want to deliver. As it launches in Seattle, it will have items from about 1,000 different venues and will be adding more as users let it know through the app which places are most popular.

Soon, Postmates plans to roll out a self-serve platform that will allow vendors to manage their own inventory of items to choose from. That will allow business owners to “claim” their venue and update items on their own, as well as possibly offering subsidized delivery through the app. The platform is currently in tests with Whole Foods and other partners, but should become more widely available in the coming months.

Speaking of which, while Postmates recently expanded to offer grocery deliveries on Get It Now last September through a partnership with Whole Foods, that doesn’t mean the same functionality will be available in its Seattle launch. While users can designate items they wish to have picked up from a local grocery store, it won’t have the same level of inventory pre-built for Seattle grocery stores. That said, Lehmann said the company is working with local franchises in Seattle to change that.

If all goes well in Seattle, Postmates will be looking at other markets to expand into later in the spring. While its third market hasn’t been decided yet, New York City is probably a safe bet, due to the population density and number of residents who rely on public transportation or get deliveries through services like Grubhub or Seamless.