Israeli startup Getonic, which builds tools for small businesses wanting to sell via social channels such as Facebook, has announced it has raised $1.3 million in total funding. This breaks down into $200,000 in pre-seed funding, $550,000 seed funding and $550,000 in post-Seed funding. Getonic’s seed backers include thetime, Rutledge Vine Capital, private investor Mortimer Singer, and other unnamed angel investors.

“We have one overriding goal for our funding:  Grow the business!” Getonic CEO Adi Eyal told TechCrunch. “More specifically, we want to increase our marketing budget to bring in new users to our platform and to expand global business development activities to recruit new ‘Multi SMB’ partners (such as WIX). In addition we are looking to come to new platforms such as mobile.”

There’s a wealth of startups trying to help businesses monetize social channels — including the likes of beetailer, Ondango and Soldsie, to name three — though many specifically focus on Facebook (so-called ‘F-commerce’ startups). Getonic is certainly targeting Facebook but has widened its net to include different social outlets — name-checking Twitter, Pinterest, plus “blogs and email” as other social spaces where its ecommerce widget can be posted. An example of the widget is pictured below. 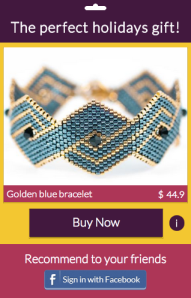 In addition to mini social shops, Getonic, which was founded in 2010, offers a “viral-affiliate program” — letting businesses choose to enable incentives to encourage buyers to share their purchases to their social feeds. Buyers doing this can earn money or rewards if their friends buy the offered item — to encourage them to do more marketing on the SMB’s behalf.

On the payment side, Getonic takes payments via PayPal or credit card. “Our system collects payments on your behalf, distributes commissions to your promoters (as relevant) and delivers your income on a monthly basis,” it notes on its website. The startup also offers a white label offering that includes analytics and reporting tools for enterprise customers wanting to integrate into existing platforms.

Eyal said Getonic currently has around 5,000 SMB customers, 15 corporate clients, and “about 15,000 distributors (signed affiliates) with more than 35,000 stores”.

Asked how it’s setting itself apart from others in this space, Eyal said by not just being focused on Facebook commerce — but looking at other social spaces too.  The CEO also said creating “fully functional ecommerce stores inside the social feed (as opposed to an ecommerce store on a Facebook tab)” is a differentiator, and also pointed to the incentive features — whereby users can earn a commission for purchases they help to generate — as another way it stands out from the F-commerce crowd.