This is the first outside funding the company has taken in since its founding back in 2011.

Mobilewalla was an early player in the app search and discovery industry, but around a year ago, the company announced it was heading into the analytics business. At that time, the service it described sounded fairly commonplace. According to an article about the forthcoming service on MediaPost, for example, the service was said to combine publicly available ranking data with developers’ private sales data, as well as things like social mentions on sites like Twitter and Facebook. The startup had amassed around 50 terabytes of data from Apple’s App Store and the Android Market (now Google Play), the report said, and was adding around one terabyte more each week.

But as you can tell from this new funding, there was more to Mobilewalla’s offering than just another app analytics platform.

Explains Mobilewalla founder and CEO Anindya Datta, the company has been building new technologies to organize mobile users into various demographic groups. “If you think of what Nielsen does for TV or comScore does for web – they do audience measures,” Datta says. “We’re working to come up with ways to measure audience in mobile.”

For web and TV measurements, firms like those mentioned above use panels – a cross selection of users whose behavior is then projected out to the broader world, Datta says. But that’s something that’s impossible to replicate on mobile, because app popularity is so volatile. To give you an idea of what he means, a TV show that’s popular now is likely to still be popular 90 days from now, but if you look at the Top 100 Apps in the Apple App Store a week from now, there’s a 50 percent churn rate.

Today, most companies doing audience measurement for mobile are using self-reported demographics. In some cases, they pull in demographic data via Facebook (often used for app logins), which allows them to get at demographics like gender, age or location, for example. Mobilewalla, however, is working to build “Quantcast-like demographics.” That is, things like very specific, detailed age buckets (e.g., less than 12, 12-18, 19-24, etc.), income brackets (less than $25K, $25-35K, etc.), and more.

The way Mobilewalla estimates that data is its secret sauce, so Datta spoke of things at a very high level. “How we bucket these apps is the core IP of the company, and it’s hard,” he says – and this is coming from a PhD, ex-computer science professor with over two decades of industry experience.

The process, broadly, involves machine learning and big data. More specifically, it entails clustering the nearly 2 million apps Mobilewalla has indexed to date into very small buckets (~100 apps per bucket, e.g.) based on the similarity of users.

Each bucket has a reference app, whose demographic data is known. And it’s known because Mobilewalla either has a relationship with the reference app’s company, or because the app demographic data is generally the same as its public website. For instance, TripAdvisor’s mobile app users are like those of TripAdvisor on the web. All the apps assigned to each bucket have the same type of users.

Then, using Mobilewalla’s APIs, the company’s clients can ask the service to return apps with very narrow demographic selections and get the results instantly. Already, a few of the new, real-time bidding exchanges are using Mobilewalla, Datta says.

Assuming Mobilewalla’s data is accurate and reliable, the value proposition it offers is unique, and certainly fundable to the tune of $4 million dollars.

“Mobile advertising is still at its infancy, and one of the reasons is because brands are very wary of doing brand advertising on mobile,” Datta says. “They’re not sure the audience reach capabilities are there yet, like on the web – that’s the problem we’re addressing.” 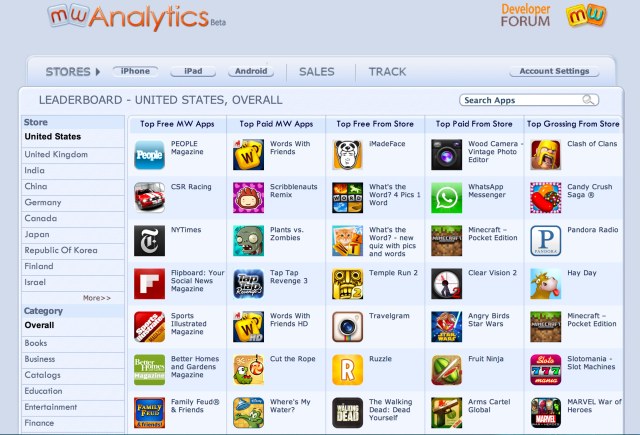 Until now, Mobilewalla’s analytics service had been hidden away from users visiting the main company homepage, where it has been listed as “coming soon” for months on end. But the analytics service was very much alive, quietly amassing over 3,500 publishers since its March debut. Datta doesn’t have permission to disclose its big name customers on the publisher side, but on the client side, he could tell us that top mobile ad network InMobi is a notable client.

Formerly based in Atlanta, the now 13-person team is relocating to Seattle in March, joined by COO Jay Clark, who previously held the CEO title. Datta says his and Clark’s daily duties aren’t changing, though.

With the new funding, the company is planning to staff up on engineering, particularly in product management, and is hoping to grow to 30 employees in the next six months. It will also be able to bring those older, terabytes of data out of secondary stores, and return them to active stores on Amazon Web Services, where Mobilewalla now has around 65 terabytes of app data.

As for Madrona’s involvement, Datta says they were chosen for their links to both Amazon and Microsoft. “They understood the [mobile] ecosystem and had the right connections,” he says. Amazon, in particular,  he added “could be a great partner.”