There’s nothing more terrifying than thinking you crossed the line by sending a risqué photo. Worrying that the person you sent a goofy Snapchat or Facebook Poke to thinks you’re an idiot is no fun either. Did they even actually see your self-destructing photo? Ephemeral messaging has a feedback problem.

The philosophy of the whole impermanent communication craze is that, in the real world, the things you say aren’t written in stone for eternity, so everything you say online shouldn’t be either. People are sick of having all their posts lasts forever thanks to Facebook Timeline, Twitter’s indexability and blog archives. Permanence makes things too formal and stodgy. It promotes vanity and success theater, where you only want to share what makes you look good.

Ephemeral messaging is supposed to give you the freedom to let your guard down, be silly and shoot from the hip (sometimes literally). That’s how we act offline when we’re with friends and lovers.

But communicating in-person also affords us real-time feedback. Be too silly and friends roll their eyes. Get too raunchy and your partner will visibly squirm. That helps you backtrack, apologize and return to your mutual comfort zone. We’re not getting this in Snapchat or Poke, the top ephemeral messaging apps. That leads to anxiety, awkwardness and broken conversations.

Both apps have read receipts, meaning you can see whether someone “opened” the message you sent them. But that doesn’t tell you if they slipped and clicked a message but didn’t actually see it. And it definitely doesn’t tell you if they thought it was funny, sexy, mundane, stupid or offensive. When I send someone a Poke or Snap and don’t know if they dug it, I’m a lot less likely to Poke/Snap them in the future. 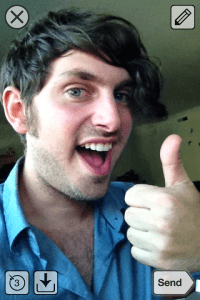 Snapchat is all photos and videos. So unless you switch to text messages, the only way to give someone positive feedback on something they sent you is to Snap back a photo of you smiling or giving the thumbs up, or a quick video in which you voice your approval. That’s a fair amount of work. Poke has better solutions. You can send text-only Pokes or a nondescript, old-fashioned “Poke” as well as photos and videos. But I rarely get those in return when I send people Pokes.

Both of these apps need a lightweight, one-click way of saying “Hey, that was awesome. Send me more.”

My only guess as to why they don’t already is a misguided hope that you’ll go the full nine yards and send a photo or video back that could keep the conversation going. But that’s not working. In most cases, my ephemeral messages get a daunting silence in return.

Maybe the answer is a Like button, which people are familiar with. Likes are typically pretty public, though, so that might not be exactly the right term. The fiercely independent Snapchat probably wouldn’t call it a Like button anyway.

Perhaps the right move is to let people send a thumbs up, a heart or an emoticon. But something, soon, please. I’m tired of getting the cold shoulder and feeling like I’m caught with my pants down.