Last year, Kickstarter launched a bumper crop of smart watches that connect via Bluetooth to your smartphone. The field was led by the record-setting Pebble, but also included products such as Cookoo, the MetaWatch Strata, and Martian, all of which have shipped by now. Recently, though, a number of timepieces have surfaced that bring us back to basics when it comes to telling time. 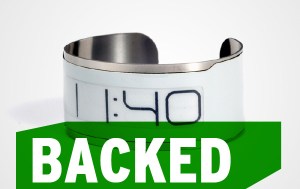 Backed: CST-01. Briefly mentioned in last week’s column amid CES alum Tethercell, the CST-01 is certainly a high-tech timepiece that tackles several challenges with smartwatches — girth, complexity and short battery life. Like the recently shipped Pebble watch and the still-delayed Touch Time by Phosphor, the CST-01 uses e-paper technology to display the time. Unlike those watches, though, that’s about all it does — no Bluetooth, no touchscreen, no launching of poison darts into the neck of the enemy spy.

The result is what project originator Central Standard Time claims is the world’s thinnest watch at 0.8 mm, one that dispenses with traditional straps and clasps with its bangle design. Unfortunately, the slim profile makes for some compromises. The watch requires a base station in order to be charged, which needs to take place about once per month, and the power cell is slated to burn out in about 15 years. Forget about passing this on to the next generation that futurists say will be able to tell time simply by looking at their phones.

Thin is in and the CST-01 has already more than quadrupled its goal with about 10 days left to go in the campaign. Watches are still available to backers in black or what passes for white in the e-paper world for $129 and are slated to ship in September. 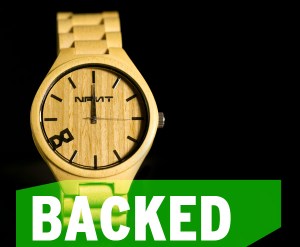 Backed: The Big Face Woody. This creation of Hawaii-based NFNT (pronounced like the synonym for “eternity,” not “baby”) can claim the cheekiest name for a Kickstarter design product since the MorningHead hair-moistening aid of a year ago. The Big Face Woody (endorsed neither by Mr. Allen, Mr. Harrelson or Mr. Woodpecker) is a watch made wholly of bamboo, save for the steel clasp.

Bamboo is one of the most favored crowdfunding materials up there with silicone and aluminum. The wood, so notes the Kickstarter campaign page, is strong and lightweight. The Big Face Woody weighs in at only 50 grams, (although that’s still four times the weight of the wispy CST-01’s 12 grams) and eco-friendly. The social consciousness of the design team is also reflected in a couple of paragraphs talking about student financial hardships, although there is no direct connection made between raising the funds and helping those students — even by employing them to help make the watches.

Like the CST-01, the Big Face Woody is water-resistant but not waterpoof. NFNT has met all its stretch goals, having collected more than six times its original $11,000 funding goal. The watches, in a range of face sizes, can be preordered for $75 with an extra fiver netting you a date function. Early backers can grab their Woodys as early as March; it would surely be inauspicious for a watchmaker to ship late. 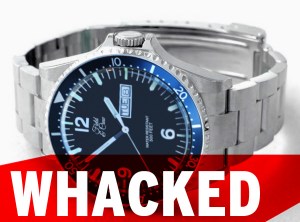 Whacked: Heritage Watch. It’s not unusual for mechanical watches to be offered to backers for hundreds of dollars; such is the case for the recently listed Coastliner watch, which can be claimed for £375. Things seemed to be going well for the effort, led by New York-based Field and Crew. The Heritage Watch would be distinguished by a “smart pin” system that would enable quick changes of wrist straps without any tools. Its entry reward tier included the watch and two bands for $199, a steep discount over the estimated $500 retail price. The campaign had raised over $16,000 — well above its $9,000 goal — and was on pace to pick up more before its February 17 ending date.

Alas, this looks like another Kickstarter campaign that has gone askew. The site has suspended the campaign and the project owner has not provided any official updates since the suspension, although backer chatter indicates that he has claimed he has not heard many specifics from Kickstarter on why funding was suspended while vowing to go to other sites to raise money if it is not resumed. The stoppage may have something to do with the similarities that have cropped up between images of the Heritage Watch and images of other watches.

Things don’t look promising, as the website for Field & Crew has gone offline. Perhaps “Chris” has been inspired by the watch-worthy words of REO Speedwagon when they sang, “I believe it’s time for me to fly.” If the project has turned out to be a scam, though, no money will have been lost by backers, as they have not yet been charged.